India’s demon to the world of cricket, the Indian Premier League (IPL) has been a classic example of a place where young cricketers get noticed and get a lot more credit than they probably deserve. Despite having played in the Sri Lankan Premier League, Sri Lanka’s priority should have been to keep Akila Dananjaya away from the glamour of the IPL © Getty Images

In the current day and age, one seldom comes across a cricketer who has a modest beginning to his international career. Gone are the days when the term success is associated with you after hours of relentless hard work and dedication to fight for your place in the team and manage to hold on to it.

With an additional format of the game to play for, coupled with commercialization seeping and creeping into the game, there seems to be an open platform that looks nothing short of a ‘backdoor entry’ to success and unexpected fame and moolah. In this churn, young aspiring minds, that would have done much better concentrating on the nuances of their game, are easily distracted.

India’s demon to the world of cricket, the Indian Premier League (IPL) has been a classic example of a place where young cricketers get noticed and get a lot more credit than they probably deserve. To think of young cricketers partying after matches and spending time with other who’s who of the game is something we would never have heard of a decade ago. But, today, it has become the way of life. Very clearly, the IPL has done more damage than good. Purely from the game’s perspective, it has destroyed the psyche of a bowler – more so of a spinner.

Young uncapped spinners who get a chance to play for a franchise are forced to curb their natural instincts of giving the ball a good flight through the air. They are required to bowl a lot flatter in order to give away as little as possible in their quota of four overs. Their wicket taking prowess is overshadowed by the need to keep the runs down. The format is such where batsmen are ruthless and there is nothing called respecting a bowler and playing by the merit of the delivery. Spinners are clearly the worst sufferers and the impact on young talents could be fatal for their careers. In the recently held player auctions, there was one Sri Lankan youngster called Akila Dananjaya, who was bought by Chennai Super Kings, but in a rather odd fashion. After letting him go unsold on first attempt, the Chennai franchise bid for him at the last moment to hand him his first IPL contract.

Dananjaya, a 19-year-old boy from Sri Lanka, is one for the future. His unbelievable control of the ball coupled with a good variety has been truly impressive. So much so that Sri Lankan captain Mahela Jayawardene asked for him to be fast-tracked into the national side after Dananjaya impressed him in the nets.

In the five matches that he has played, Dananjaya has shown great potential. He debuted in a tied match against New Zealand where he showed a great sense of commitment for a player of his age. Not only did he have the courage of giving the ball a loop against the likes of Brendon McCullum and Martin Guptill, but also came back strong after getting hit in the eye by a shot from Kiwi opener Rob Nicol.

Despite having played in the Sri Lankan version of a T20 tournament, Sri Lanka’s priority should have been to keep the lad away from the glamour and the over corporatized environment of the IPL. He may still only warm the bench throughout season six of the IPL, but even being a part of a squad in such a volatile tournament could have a negative impact on his young cricketing mind with the repercussions showing in his bowling. Currently, in the little that we have seen of him, he comes across as fearless youngster who can spend hours giving a beautiful loop to the ball and seduce the batsmen with his line, length and pinpoint accuracy. One season in the IPL could have a damaging effect on these natural instincts. 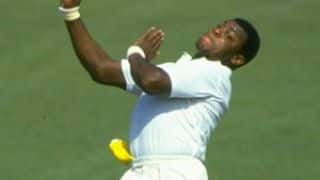