Sri Lanka ended Day One of Third Test at 214 for 5 against Australia at Sinhalese Sports Club in Colombo on Saturday.

Sri Lanka, who marched towards Day One of Third Test with high confidence, lived upto the standards ending their day at 214 for 5 at stumps in Colombo on Saturday. The start of the day belonged to Australia as their bowling unit did not leave scope of breathing for Sri Lankans before heading for Lunch. But the game saw a different tale after their batsmen Dinesh Chandimal and new bee Dhananjaya de Silva took Sri Lanka over storm. Sri Lanka, who took an unassailable 2-0 lead in Galle, have a chance to register their first whitewash against a major team since gaining Test status in 1981. Let’s have look at some of milestones and topsy-turvy day witnessed in Colombo: FULL CRICKET SCORECARD: Sri Lanka vs Australia, 3rd Test at Colombo

1) Mitchell Starc and Nathan Lyon’s ‘good morning’: Starc and Lyon broke the already weak opening pair Dimunth Karunaratne and Kaushal Silva. First target was Kaushal, who was grabbed by Starc after he nicked it to skipper Steven Smith and soon Australia got their first wicket. Soon, Kusal Mendis and Dimunth Karunaratne became target of Starc’s fast and swinging deliveries. The wickets were juggled between Lyon and Starc in the first session. After Kaushal was picked, Lyon got his first wicket as well dismissing off Kusal Perera for 16 after smashing some boundaries. Lyon ended his day getting crucial wicket of Angelo Mathews for 1.

2) Nathan Lyon-Kusal Perera’s connection: Lyon clutched the wicket of Perera for the fourth time in this series. The first moment was once during first Test at Pallekele when Lyon’s lbw sent off Perera for 20. In second Test first innings, Perera fell into the prey of Lyon’s clutches twice. In the first innings, Lyon nabbed Perera for 49, disallowing his half-century. The second innings also saw their love-hate relationship when Perera was picked for 35 by Lyon. DAY REPORT: Dhananjaya de Silva’s maiden Test ton propels SL to 214/5 at stumps

3) Mitchell Starc – Dimunth Karunaratne’s animated dismissal:  There was rare moment on the field when Starc was found animated after picking the wicket of opening batman Karunaratne’s wicket for the fifth time. As soon as Karunaratne started walking off the field, Starc showed him figures of his dismissal by him out of sheer joy. The earlier occurrences were twice during first and second Test.

4) Dhananjaya de Silva’s maiden Test ton: De Silva has shut all the lower middle-order woes for Sri Lanka with his maiden Test ton. He entered when Sri Lanka required a savior. This time Sri Lanka found their savior not through the combined efforts of middle-order but one man alone. De Silva reached his half-century off 93 deliveries that included 7 fours. He raced to century off 207 deliveries. Both were achieved with marvelous boundary. That goofy grin on his face was enough to show his happiness. TEA REPORT: Day 1, Tea: Dhananjaya de Silva’s maiden fifty helps Sri Lanka reach 141/5

5) Dhananjaya de Silva-Dinesh Chandimal’s constructive partnership: Sri Lanka needed saviours to keep the innings going after fall of five wickets. After wicket of Mathews, the chances of Sri Lanka surviving diminished. Just then Chandimal’s and de Silva’s combined efforts provided the impetus for Day 1 and kept the hosts in command. De Silva and Chandimal ended the day with an unbeaten 188-run stand for the sixth wicket. This keeps them just a two runs away from going past the record of Aravinda de Silva and Arjuna Ranatunga’s milestone of 189-run stand at home soil against Zimbabwe in 2008.

Day Two will be the deciding day as Sri Lanka can easily go past 300-run mark if Chandimal and de Silva get going. But Smith will expect his bowlers to step up and get next five wickets to wrap up the Lankan innings and take charge of the match with their batting prowess. 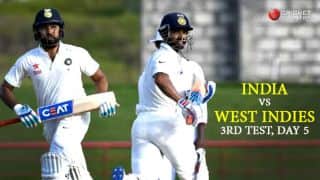