In response to Sri Lanka's 355, Australia ended Day Two at 141 for 1 at stumps at Sinhalese Sports Club in Colombo on Sunday.

Sri Lanka and Australia’s Day Two of the third and final Test, got to witness lots of twists and turns. Be it Dinesh Chandimal’s ecstatic celebrations after scoring his seventh century, Mitchell Starc’s third consecutive 5-wicket haul or skipper Steven Smith and Shaun Marsh’s fightback after bowling out Sri Lanka for 355. Australia ended Day Two at 141 for 1 at stumps at Sinhalese Sports Club in Colombo on Sunday. Although Sri Lanka had their time in the second session after picking David Warner, Australia did not capitulate after the fall of early wicket, ended up building the highest partnership in this series. There were many milestones that both the teams secured. Let’s have a look at some of the highlights that shifted the momentum on Day Two: LIVE CRICKET SCORECARD: Sri Lanka vs Australia, 3rd Test at Colombo

1) Dinesh Chandimal’s gritty knock: On subject to records, Chandimal embarrassed Australia as he stayed on the crease for 356-long deliveries, which is more than any player in this whole series. He secured his century in 281 deliveries, after entering the crease when the chips were down. Chandimal showed the fight and stoutness after achieving his century, which helped steer Sri Lanka to 355, the highest score in this series. He built crucial partnership complimenting Dhananjaya de Silva, their highest sixth-wicket stand at home for Lanka ever.

2) Rangana Herath’s unfortunate injury:  Herath entered when de Silva was out for 129, breaking a record partnership of 211 along with Chandimal. He and Chandimal went on to build highest eighth-wicket partnership of 73 against Australia anywhere. Just then Josh Hazlewood with his extra bounce struck Herath in the groin region, which had to be immediately treated. He was found out of the field until Australia began their first innings. DAY REPORT: Day 2, Report: Smith, Marsh fifties steers Australia to 141/1 at stumps

3) Mitchell Starc ‘strikes’ back: Starc continued his run of five-wicket hauls’, the third time in this series now. Starc had already shook Sri Lanka’s top-order with early three wickets of Dimunth Karunaratne, Kaushal Silva and Kusal Mendis. He turned the table around on Day Two, when Chandimal was caught at the gully by Shaun, as Starc acquired his fourth wicket. After Herath was retired hurt, Suranga Lakmal entered to cover up for the veteran. He could not withstand Starc’s dominance and was dismissed for 5, in turn Starc getting his fifth wicket. That made him the highest wicket-taker this series with total of 22 wickets under his belt.

4) Dhananjaya de Silva – Sri Lanka’s hero: Apart from scoring his maiden century and being the second highest scorer for his side, he also showed talent with the ball. When Australia’s opening batsmen Warner was raring high with a six and was nicked at 11 as he was caught behind by Perera, in turn de Silva drew first blood. ALSO READ: SL vs AUS 3rd Test Day 1 Highlights: de Silva’s maiden Test ton and other moments

5) Steven Smith and Shaun Marsh’s fighting spirit: When the chips are down, one can depend on their leader. That was exactly how it proceeded. Only once has an Australian scored half-century in this series and now there were two. Smith scored 61 and Shaun went on to score 64, building 120-run stand, comfortably Australia’s best in the series. This impressive start by Australia was just what was needed against Sri Lanka’s spinners. Shaun, who entered as replacement of Joe Burns, looked at ease with the Lankan bowlers and his score included 10 fours in comparison to Smiths five.

Day Three will look be to be a rather balanced game. If Smith and Shaun continue their steady run, Australia will have slight upper hand and Sri Lanka will need to build upon their batting skills once again. However, if Lankan bowlers step up, Australia might as well hand over the series to the Lankans and record history. 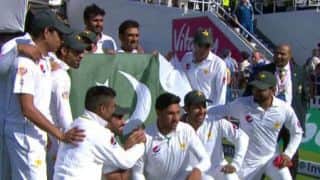