Sri Lanka defeated Australia by 163 runs on Day Five of the third and final Test to complete their first ever whitewash over the visitors. The script remained the same for the visitors, who have been outplayed in all departments in the series as, Rangana Herath continued to make merry. Ending the series with 28 scalps. Australia have plenty to ponder upon as they will be coming back to the sub-continent in 2017 for a four-Test series against India. Here is a look at the best moments from Day Five wherein Angelo Mathews’ team have sent out a strong statement to the cricketing arena with a big series win FULL CRICKET SCORECARD: Sri Lanka vs Australia, 3rd Test at Colombo

Dhananjaya de Silva’s fifty: Sri Lanka ended Day Four at 312 for 8 with the lead at 288. They were expected to add few quick runs and stretch the lead over 300. They did just that as Dhananjaya notched up a crucial fifty helped set an imposing target of 324 to the Australians. The target was always going to be tough for the visitors as their batting has not lived upto the expectations so far. Dhananjaya’s knock ensured Australia were deprived of a consolatory win in the final Test as he came out to bat with the score at 152 for 5 and took his team to a commendable total. Match Report, Day 5: Sri Lanka complete Australia whitewash

David Warner, Shaun Marsh’s 50-run stand: Australia have had a torrid time in the sub-continent, especially with the bat. They did not have a single half-century stand for the first wicket but ended the series on a high, in this aspect, as Warner and Marsh played sensibly, and at a quick rate to add 77 for the first wicket. Marsh departed just before the stroke of lunch for 23 while Warner had reached 44 by then.

Wickets tumbled like nine pins: Australia required 247 runs to win in the last two sessions and looked like giving a tough fight to the hosts as they were going at a good rate. Smith and Warner took the team’s total to 100 but Smith’s dismissal opened the shackles for Sri Lanka’s win.  Herath ran through Australia’s crumbling middle and lower-order, as every batsmen came and perished. They were eventually bowled out for 160, while at one stage they were comfortably placed at 100 for 1. Their batsmen lost cool in the middle as Warner played a sweep shot to be clean bowled by Dilruwan Perera. Moises Henriques, Mitchell Marsh, Adam Voges and Peter Neville could not even add 20 runs between them, which resulted in their shocking collapse.

Herath’s ten-wicket haul hands Sri Lanka a memorable Test win: Sri Lanka are going through a tough phase after the retirement of Mahela Jayawardene and Kumar Sangakkara. They had a tough time in England, and had lost the home series versus India and Pakistan in 2015. Their young guns emerged from the bottom and almost every one stood up when the chips were down. Among the veterans, Herath demolished Australia’s batting line-up whenever he was offered the red cherry by his captain. When Australia started to get nervous, after lunch, Herath ran through their batting and notched up several records in the process. He joined former England player Derek Underwood, for most ten-wicket hauls (six) for a left-arm spinner, will ending up the series with 28 dismissals. ALSO READ: Karunaratne’s dismissal wasn’t against spirit of the game: Nevill

For Sri Lanka, this was their fifth whitewash in Tests whereas Australia also succumbed to their fifth whitewash in a series comprising of three Tests or more. In the ICC Test rankings, Australia have already dropped down to the third position with India and Pakistan becoming No. 1 and No. 2 respectively. Sri Lanka, on the other hand, have moved to the sixth spot by adding ten points to their kitty. 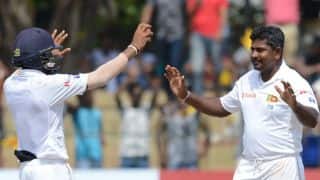