Sri Lanka vs Australia, 5th ODI: How much will hosts miss Angelo Mathews in final encounter?

Sri Lanka vs Australia, 5th ODI: How much will hosts miss Angelo Mathews in final encounter?

The tables have turned with Australia smiling and Sri Lanka looking no match to the visitors in the final ODI.

The fate of the series is already decided. Australia have won the One-Day International (ODI) series against Sri Lanka with a match to go. A 3-1 scoreline would have pleased the Australians with the way their performance panned out in the longest format where they were whitewashed. The Sri Lankan fans who entered the stadiums in big numbers after seeing a depleted Australia in Tests were expecting the same script in ODIs. They were taken aback by Australia’s eagerness and disciplined performance as their national team will now like to play the series finale for ending the series on a high. Full Cricket Scorecard: Sri Lanka vs Australia, 5th ODI at Pallekele

With the series ending tamely before reaching its climax, Sri Lanka have more to ponder. Their regular skipper, Angelo Mathews has been ruled out for the remainder of the tour due to a calf injury, with an ODI and mini Twenty20 International (T20I) series left on hand. This makes Dinesh Chandimal the leader of the pack for the interim period. When the chips are down for a side, they look to their skipper and an inexperienced and hapless Sri Lankan team will surely miss the services of Mathews. ALSO READ: Sri Lanka vs Australia: Angelo Mathews ruled out of remaining matches

Mathews- As a leader:

Mathews knows the strength and weaknesses of his troops. He has been handling the youngsters and has gained confidence and backing from recently retired stalwarts like Mahela Jayawardene and Kumar Sangakkara. It is safe to say he knows all the tricks by now and has soaked up the pressure of leading. This is entirely his team and the side which will feature in upcoming ICC events. The more he stays out due to fitness, the more clueless his side will show up on the field. On spin friendly tracks, he knows how to rotate his bowlers as Sri Lanka rely on spin. Mathews becomes really busy if the track is conducive to spin (somewhat like MS Dhoni). The push needed to be given to them was slightly missing in the fourth ODI though Chandimal was not bad at all.

The fourth ODI was lost only because of the resilience shown by George Bailey at the crease. He led his side to a morale boosting series win and probably no skipper’s presence could have made the difference. For the upcoming matches, Sri Lanka would need Mathews. He is a vital cog of this inexperienced side. He is half the side and someone who can remind the boys to still play with a purpose and not get bogged down with series already being done and dusted.

There have been numerous occasions when Sri Lanka’s batting have been in troubled waters and it has been Chandimal and Mathews who have rescued their sinking ship. Without him, Chandimal, who has been in prolific form, will also have to search for a batsman who can hold one end to allow him to settle in and play a big innings. In the last ODI, Mathews was doing everything right with youngster, Dhananjaya de Silva as the duo had added a vital 80-odd runs but Mathews sudden departure due to injury opened the floodgates for Sri Lanka’s surrender.

Throughout his stand with de Silva, he was ensuring they go after the bad balls and respect the good ones. De Silva was also growing in confidence with the backing of his captain as he knew he had an able partner at his disposal to mentor him. Mathews left and the obvious happened. A well settled de Silva tried to pull a well directed bouncer, which resulted in an easy catch for Aaron Finch off John Hastings. This triggered a collapse and the hosts’ innings summed up for 212. Mathews’ void will be felt as he not only ensures runs from his blade but also guides others. He is also their finisher as it was seen in the last match when he came out to bat again in the end and stuck a few vital boundaries to help his team cross the 200-run mark. ALSO READ: George Bailey: Underrated yet undeterred campaigner for Australia

Sri Lanka have played with as many as six spinners in this ODI series. Their genuine quickies have been Thisara Perera and Mathews. Mathews also took upon himself to open the attack and caused a few setbacks to Australia’s chases. He filled in for a genuine pacer as Sri Lanka continued to attack Australia with their spinners. His two early wickets in third ODI allowed the tweakers to attack from ball one. This is the biggest disadvantage Sri Lanka will be exposed to with his ouster from the remaining series.

The Sri Lankan think tank will have to bring in a genuine quickie, which may result in the axing of one of their struggling batsmen. Playing one batsman short may dent them further and they may be hesitant with such a change. On the other hand, Dasun Shanaka has been included but he will also miss the calm and composed Mathews who could have complimented him from the other end. ALSO READ: SL vs AUS: Wade disappointed over exclusion from T20I squad

There is plenty to play for Sri Lanka and be concerned as both teams head to the final ODI. The tables have turned with Australia smiling and Sri Lanka looking no match to the visitors. Things have turned to be complicated for them with their regular captain leaving midway due to injury. They will miss him, but how will his absence cost them is to look out for. 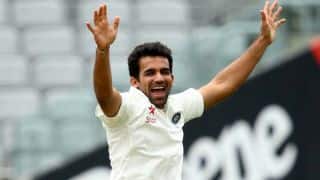 Zaheer Khan: India vs New Zealand Test series will be an even battle 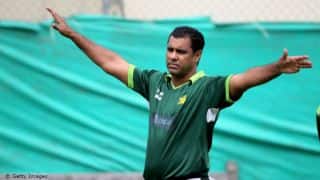