Sri Lanka have gone off the boil abruptly, which is a worrying sign in run up to the WC 2015.

Sri Lanka were perhaps one of the best sides of 2014 till their shocking 5-0 whitewash against India last month. Since then, they have lost six out of the eight One-Day Internationals (ODIs) they have played, despite playing with a more or less full-strength side. Shiamak Unwalla wonders what is going wrong with the Lankans so close to the ICC World Cup 2015.

Sri Lanka have had a good year’s cricket. They started the year with a draw against Pakistan in Abu Dhabi in January. Subsequently, The keenly-contested three-match series was tied 1-1 after each side won a game. They followed it up by winning a Test series against Bangladesh 1-0, and clean-sweeping the Twenty20 International (T20I) and ODI series that followed.

They were undefeated in the Asia Cup 2014, winning the final against Pakistan easily. After that came the ICC World T20 2014, where they reached the final against India and were expected to once again miss out. However, they put in a bowling performance to be proud of, and strangled the Indian batting juggernaut to ensure a victory in a World Cup after 18 years.

They then beat Ireland 1-0 in a two-match ODI series before heading on to England where they won the only T20I. They managed to prevail over the hosts in a hard-fought ODI series by winning 3-2. Their crowning moment though, was their 1-0 Test victory over a formidable England side.

After that, they suffered their first blip. The visiting South Africans edged out their hosts 2-1 in the three-match ODI series before managing to win the Test series 1-0. They got back to their winning ways against Pakistan in the Test series that followed, winning 2-0. After losing the opening ODI against Pakistan, they came back to win the series 2-1. They even won the Asian Games Cricket Competition at Incheon that followed, with a markedly weak side.

Below is each team’s record across formats this year till October 2014.

As seen above, they were absolutely dominant in this period. However, they have fallen apart since then. Below is each team’s record across formats since October 2014:

Bangladesh beat Zimbabwe in three Tests and five ODIs, which has boosted them to the No. 2 position despite winning only three of their 28 matches before this period. India of course find themselves in a good position, with their only loss coming against West Indies. Sri Lanka, however, are quite poorly off in this period.

Considering how sublime Sri Lanka were for the first 10 months of the year, it is worrying indeed that their record has gone so abruptly downhill over the last month or so. The sample size is obviously too small to make any sweeping statements, but their loss to England in the third ODI would doubtless have caused a few raised eyebrows.

They must get their act together and come up with the type of performances that they churned out at the start of the year. If they do not arrest their slide in time for the ICC World Cup 2015, all their good work over the last year will be for nothing. 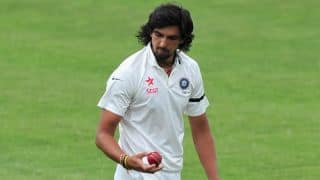 Ishant Sharma: I don't see myself as a role model for other bowlers