Joe Root made sure he took England safely towards a five-wicket win.

England edged out Sri Lanka by five wickets in the third One-Day International (ODI) on Wednesday. Varun Arora looks at the highlights of the match.

The early rain:  Black clouds hovered around the island town of Hambantota and build up increased after first two overs were bowled by the England bowlers. The play later hit as the clouds opened and rain sprayed around ground. The played looked unlikely at one point but luckily the weather cleared up and the match was reduced to 35 overs a side. The floodlights were on for an early duty to cover up for the low light.

Kumar Sangakarra’s 13,000 runs and 474 dismissals:  Kumar Sangakkara crossed the 13,000-run barrier as he went on to score 63 off 62 deliveries. Sangakkara became the second Sri Lankan batsmen after Sanath Jayasuriya and fourth batsmen in the history of cricket to reach the milestone. Later, he achieved the record for most dismissals in ODIs. Sangakkara caught Alastair Cook off Dhammika Prasad to complete his 473rd dismissal in ODIs leaving behind Australian wicketkeeper Adam Gilchrist.

Lahiru Thirimanne’s late punch:  Thirimanne’s unbeaten 62 off just 47 deliveries took Sri Lanka to a total of 242 in 35 overs. Thirimanne came onto the crease after the dismissal of Sri Lankan captain Angelo Mathews and continued to steer the Sri Lankan innings till the end.  He smashed three consecutive boundaries off Ben Stokes’ bowling in the 31st over.

Moeen Ali’s early assault: Moeen Ali took the early assault on the Sri Lankan bowlers. He chipped in with 40-ball 58 which included five monstrous sixes. His footwork was majestic as he shimmied down the track artistically and lofted the ball all over the park.  He started with a six over the cover region on the bowling off Thisara Perera and later he thrashed Tillkaratne Dilshan for twin sixes in the 10th over. His crafty touch gave England an attacking start in the chase of a big total.

Joe Root’s finishing touch: Joe Root made sure he took England safely towards a five-wicket win. Root stood steady in the crease as he contributed with 48 runs off 48 balls which included two boundaries and two sixes. Root arrived on the crease only in the 15th over of the match after the dismissal of Moeen Ali. He took complete charge of the situation and took England to victory with eight balls still to be bowled in the match. 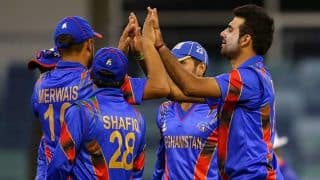 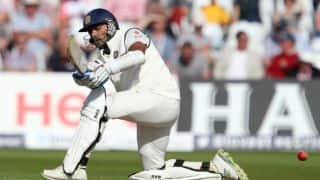