Sri Lanka won the final ODI of the seven-match series by 87 runs to win the series 5-2.

Sri Lanka clinched the seven match One-Day International (ODI) series against England 5-2. The final match at Colombo was an eventful encounter in which the hosts registered a 87 run victory. Sandipan Banerjee looks back the highlights of the game.

Technically the game was a dead-rubber, but Sri Lanka had a lot to play for in this game as it was the last home ODI for two of their cricketing heroes, Mahela Jayawardene and Kumar Sangakkara. After serving Sri Lankan cricket for well over a decade, they bid farewell to their home soil in front of a packed stadium at Colombo (RPS), though both of them threw their wickets away after getting set. Jayawardene, who once again opened the batting got out for a quick-fire 28 while playing an attacking shot to Harry Gurney. Sangakkara, on the other hand lost wicket to a Moeen Ali full-toss when he was looking all set for big score.

Angelo Mathews though gave Jayawardene a chance to roll his arm over at the final stages of the game. Jayawardene, didn’t disappoint him or his fans and got his 14th ODI wicket of his career in the form of James Tredwell.

During Sri Lanka’s innings, at one point of time, it seemed the hosts will finish somewhere between 260 to 275. But when Dilshan got out in the 44th over, Dinesh Chandimal and Thisara Perera came together and formed an fifth wicket partnership of 63 runs of 35 ball, of which Thisara himself scored 54 off 26 balls. It was only because of this onslaught by those two, Sri Lanka managed to cross the 300-run mark. Thisara also reached a thousand ODI runs, thus securing the much-coveted “double” of 1,000 runs and 100 wickets.

For England, only Joe Root put up some resistance with a 99-ball 80. He needed support at the other end, but unfortunately that did not happen. Though wickets kept falling from the other end, Root tried to play his natural game. His 50 came off 59 balls and till he was there England were in the game. The match was finally decided in Sri Lanka’s favour, when Root was out leg before wicket off Seekkuge Prasanna in the 41st over. 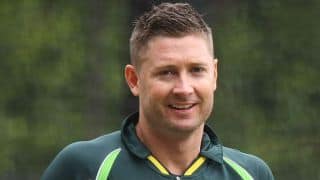