As Sri Lanka take on England, both teams will want to gain victory over each other as this tie will determine their fates in the ongoing World T20.

England and Sri Lanka face off against each other in Match No. 29 of the ongoing ICC World T20 2016 at Delhi. This encounter will take place at Feroz Shah Kotla Stadium, which has been a low scoring venue. England in their last match against Afghanistan was dealt with a middle order collapse, while Sri Lanka was shaken by Andre Fletcher onslaught on their bowlers. Sri Lanka will feel the heat as they desperately need a win to stay alive in the tournament and England will look to win their final match of the Super 10 stage to have a good shot at qualifying in the final four. With such permutations and combinations at stake, Vishal Mehra has a look at the most sort after battles on the field to take place when these two teams collide. LIVE CRICKET SCORECARD: England vs Sri Lanka, T20 World Cup 2016, Match 29 at Delhi

Joe Root vs Rangana Herath: Joe Root has been England’s go to batsmen since inception of the tournament. Root has been in phenomenal touch with the bat, making 143 runs in three-matches. Root was the only reason why England chased down West Indies total of 180. Rangana Herath on the other hand will look to get his form back after being wicket less against West Indies. Herath was a match changer in match against Afghanistan picking up 2 wickets. Herath will look to make a fairy tale ending if he decides to retire at the end of the event. Root will in all-likelihood cherish the battle and look upstage Herath.

Moeen Ali vs Jeffrey Vandersay: Moeen Ali was the only saving grace for England in the match against Afghanistan. Ali 41 from 33 balls helped his team manage to get to a par total of 142. Ali has been also good with the ball in the tournament, which only adds to his importance in the team. Jeffrey Vandersay on the other hand played his first match against West Indies, picking up one wicket in the process. His leg-spin will only add to the difficultly of the England batsmen, who are known to be troubled against spin.

Dinesh Chandimal vs David Willey: Dinesh Chandimal after his initial good run with the bat against Pakistan has been on a downfall. It is vital for Sri Lanka to have Chandimal back to his scoring ways. Chandimal admitted that his middle-order inconsistency have been saddening, will want to give them a good head-start this time around. David Willey on the other hand is coming from a good show with the bat and the ball. Willey scored match changing 20 off 17 balls and picked up 2 key wickets. Willey has taken on the responsibility of the new ball bowler, and has upped his games as well.

Adil Rashid vs Thisara Perera: England will need Adil Rashid to pick up wickets, if they have any chance of containing the Sri Lankan batsmen. Rashid has been in good form off late picking up two wickets in the last match versus Afghanistan. Rashid has been looping the ball and deceiving opposition batsmen in all the matches. Thisara Perera played a valiant innings of 40 with the bat against West Indies, getting his team to a decent total. Perera lower order hitting has added good value to the Sri Lankan team, who have been unable to get going with the bat in the death overs. 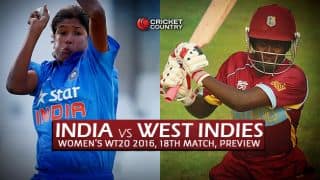