Sri Lanka will bank on the duo of Rangana Herath and Jeffrey Vandersay to keep the scoring rate of the England batsmen under control in their encounter at Delhi.

Sri Lanka play England in a bid to start alive in the ongoing Twenty20 (T20) World Cup 2016. Match No. 29 will see both defending champions and former champions take on each other at the Feroz Shah Kotla Stadium in Delhi. Lankan Lions are coming off from a thumping defeat by the hands of West Indies, who will need to regroup and execute their planned strategies on the field. Sri Lanka are currently at third spot in Group 1, with 2-points from as many games. Sri Lanka have been hampered by the unavailability of their regular T20 skipper Lasith Malinga, which has made their bowling look fragile, to go along with the under-performing batting middle-order. Vishal Mehra, types down the possible playing XI Sri Lanka might field in a attempt to defend their beloved tittle.  LIVE CRICKET SCORECARD: Sri Lanka vs England, T20 World Cup 2016, Match 29 at Delhi

Top Order:  Much of the Sri Lankan batting woes has been about their openers not giving them a good steady start beginning of the innings. Dinesh Chandimal and Tillakratne Dilshan are to be blamed upon, both have got decent starts and have thrown their wickets away. Chandimal was also unlucky to have been run-out in in the last match. Dilshan on the flip side after his innings of 83* against Afghanistan has not been able to get the same timing with his bat. Coming in at No.3 is Lahiru Thirimanne, he has just been among-st the runs so far, but given his show in the warm-up ties, it is just a matter of an innings. Hopefully for Thirimanne this match will be the moment he shines and excels for his team.

Middle Order: As admitted by Chandimal the Sri Lankan middle order is inexperienced, which has been a cause of worry. Chamara Kapugedera who is given the slot at No.4 in the batting order has been a let-down so far in the three-matches he has featured. Kapugedera has regularly managed to get into double figures, just to miss out on big innings. Skipper Angelo Mathews himself has not been in good form, which is downer for the team. Angelo was to lead the team in batting but has only disappointing so far, noting getting more than 20’s. Milinda Siriwardana, who only performed with the ball in his last outing will want his bat to do the talking more than his bowling.The only one bright spot in the Sri Lankan side has been Thisara Perera. Perera has been good with both bat and ball, in times of trouble for the time. Perera hit a quick fire 29-ball 40 versus West Indies, guiding the team to a par total of 122.

Lower Order: Nuwan Kulasekara in this tournament is having a poor run of form, he is being taken for plenty. Kulasekara, who is sharing the new ball has been ineffective with it, but given his experience at the grandest stage it only holds good for the team to have him near youngsters. Rangana Herath, who in all probability play his last global event for Sri Lanka, will look to leave on a high, given the amount of service he has given to the country. Herath will also look to guide the youngster Jeffrey Vandersay, who was a revelation against West Indies, outfoxing the batsmen with his leg-spin. Both Herath and Vandersay will create a lot of panic in the minds of the opposition even before the match. Leading the face-attack in the absence of Malinga is Dushmantha Chameera, who has bowled his heart out in the World T20 only to be denied wickets. His impeccable bowling early on in the innings has impressed one and all.

With the tie being played at Kotla, Sri Lanka go into the match knowing that the pitch will definitely turn and with the duo of Herath, Vandersay  with  additions of Siriwardana  and  Dilshan makes them dangerous. Now it is up to their batsmen to shift gear and make their best use of the skills. 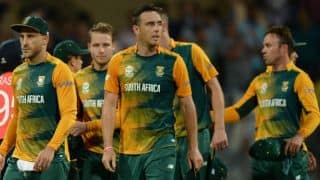