Younis Khan may not have fanatic followers, but he can produce an outstanding innings out of the blue. He has been recalled for the One-Day Internationals (ODIs) after one and half years to add colour to the Pakistan squad. Rajarshi Majumdar further pens down how Younis is still an asset for the Pakistan middle-order and how his presence in the team can make a difference in the 2015 World Cup in Australia and New Zealand.

When the ball starts to find the sweet spot on Younis Khan’s bat, the Pakistani team tends to relax and settle down. He walks on to the field with a sense of composure and calmness. On the other hand, his career is coming to an end. He will probably be gone sometime after the 2015 World Cup. But his stature will, in all likelihood, allow him to play on for another year until he wishes to retire on his own terms instead of getting dropped by the Pakistani selectors.

He has overpowered many odds till date and has gone on to play 253 ODIs. He has 7,014 runs under his belt with an average of 31.88. The middle-order conundrum across all formats for Pakistan never faded away. Younis Khan was a solution to their problem. He lived up to their expectations. He almost never got to play with a competent top order throughout his career (barring the small overlap with Saeed Anwar). Unfortunately, Anwar retired even before Younis’ career had kick-started.

Younis had last played an ODI against South Africa in March 2013; he had ambled to 29 off 58 balls — an innings that had steadied Pakistan — but it turned out to be a lost cause. South Africa won the match by six wickets. After that he was dropped but was a regular member in the Test squad. The road to the World Cup 2015 for Pakistan will not be an easy one as they will face the mighty Aussies in their second home in United Arab Emirates after their tour to Sri Lanka.

Pakistan will surely have a steady middle-order with the likes of Younis taking up the responsibilities along with his captain Misbah-ul-Haq. Younis’ batting is not the sort to delight the spectators but his predominance of the bottom hand and his formidable ways to master the spinners are definitely well known. He is not an ODI run machine as the other Asian batting maestros but the resilience that he puts up is his trademark.

Pakistan will play a three-match ODI series against Sri Lanka which starts on Saturday. They have suffered an embarrassing 0-2 defeat in the Test series last week against Sri Lanka which was also the last Test series for another Asian maestro — Mahela Jayawardene. Younis will look to bolster their batting attack and he will also bring in a great deal of experience into the side which will help the side prepare mentally for the 2015 World Cup. 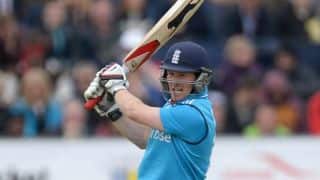 Eoin Morgan believes England must be more aggressive in ODIs