A look at the possible Pakistani players to take the field in the final ODI on Saturday.

Pakistan have been an inconsistent side and they showed it in an unlikely win in first One-Day International (ODI) and then with a tame loss in the second. But they’ll be boosted by the return of Saeed Ajmal. Abhijit Banare looks at Pakistan’s likely XI.

Very few teams are as unpredictable as Pakistan when it comes to limited overs format. They left their fans amused when they pulled off an unlikely victory in the first match. But a similar chase under lights saw them falter. With the likes of Shahid Afridi, Umar Akmal, Fawad Alam and others, Pakistan are an aggressive batting unit which on several occasions has benefitted the opposition more than theirs.

Batting: Ahmed Shehzad will continue to open along with Sharjeel Khan. Though the latter has looked out of touch, Pakistan have little options going in to a crunch game. The top-order still seems fine when you add Mohammad Hafeez at No 3 who has done well in both matches.

Middle order boost: This has been a disappointment. An aggressive batsman like Umar can run away with the match. Perhaps, Misbah-ul-Haq could do well to swap places with Umar. The skipper has better temperament to anchor the innings than an aggressive Umar at No 4. Maqsood and Alam seem to be the perfect ones to hold the innings till the end and with Afridi to follow, they have the ammunition in their batting.

Bowling: Similar to the Lankan attack, Pakistan have plenty of bowling options. The return of Ajmal along with Afridi and Hafeez are a solid spin attack. Pace department hasn’t quite clicked for them. Though Wahab Riaz has been impressive with seven wickets in two matches, Mohammad Irfan and Junaid Khan have looked erratic. With Ajmal’s return, one of them will have to warm the bench. In all likelihood, it will be Junaid. Irfan has troubled Tharanga and Sangakkara with his bounce. And it is his ability to generate that extra bounce which the captain will love to have over Junaid.

Final take: With Ajmal’s return and enough bowling options, Pakistan’s case remains the same as it has been for few years. The batting needs to click as a unit. Umar Akmal at No 4 needs to fire and if he does, the Sri Lanka could land in trouble. On paper, Pakistan have the skills to outclass Sri Lanka. But they often mess-up at crucial junctures. Going by form, Hafeez seems to be a strong contender to lead their batting. 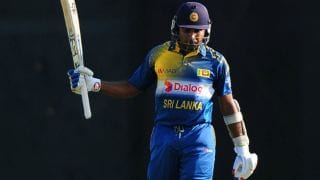