A confident Sri Lanka team would look forward to clinch victory in the second ODI and seal the series straightaway.

After winning the Test series and the inaugural match of the three match One-Day International (ODI) series against the visiting West Indies team, a confident Sri Lanka team would look forward to clinch victory in the second ODI and seal the series straightaway at R Premadasa Stadium on Wednesday. Sri Lanka, who have been brilliant on this tour so far, started off the ODI series in a positive note bagging a dramatic win. But it was a close match, which reflects that the visitors are not to be taken lightly as they will look forward to leave a mark with their performance in the ODI format. SCORECARD: Sri Lanka vs West Indies , Live Score, 2nd ODI match, Sri Lanka vs West Indies 2015

The rain-affected match permitted with only 26 overs of play for both the sides and West Indies made 159, thanks to Darren Bravo who scored a much needed 38 to provide some support to the team. Andre Russell(41) and Jason Holder(36) late flourish helped West Indies reach a competitive total. Sri Lanka, chasing the target of 160, also did not seem very promising Tillakaratne Dilshan brought his experience into play and scored a crucial half-century. Ajantha Mendis played a crucial role as a tailender to steer Sri Lanka to a win with his unbeaten knock of 21. Sri Lanka won with one wicket and one over remaining. The match has been more fruitful for the bowlers as Suranga Lakmal, who took 3 for 15 for the hosts and Sunil Narine traded 21 runs for his 3 wickets for West Indies.

Top Order: Looking at the performance produced by the team in the last ODI, the key batsman for Sri Lanka clearly seems to be Tillakaratne Dilshan. Dilshan scored a brilliant 32- ball 59 opening for his side while the whole team failed miserably. Kusal Perera will have to experience into play but can be a force to be reckoned with once he gets his eye in. With Lahiru Thirimanne coming out to bat at number 3, the top order seems settled.

Middle Order: The most promising name in the middle order is skipper Angelo Mathews who will take care of the No.4 spot. Following him, is Danushka Gunathilaka who has has good First-Class record. Looking at how Ajantha Mendis’performance in the first match he can be elevated up to No. 7 while a promising raw talent like Shehan Jayasuriya can be sent in at No.6..

Bowlers: The most successful bowler for Sri Lanka in the last ODI has been Suranga Lakmal with his 3 wickets while Ajantha Mendis has got 2. Milinda Siriwardana has also got wickets in the Test matches and is expected to repeat the same when handed the ball. But all eyes will be on Lasith Malinga who is yet to get a wicket in the series. 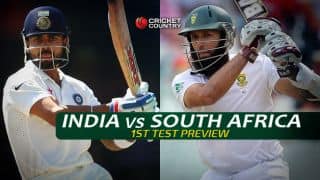