A three year long wait for an elusive Test series victory has finally ended for Sri Lanka. It’s astonishing fact that Sri Lanka – a team that has been dominant over the years in its own backyard - failed to clinch a series at home, let alone abroad, since 2009. While Mahela Jayawardene and his men celebrated the triumph, the world asked a very intriguing question: Why didn’t Sri Lanka go for the kill in the final stages of the third Test? © AFP

A three year long wait for an elusive Test series victory has finally ended for Sri Lanka. It’s astonishing fact that Sri Lanka – a team that has been dominant over the years in its own backyard – failed to clinch a series at home, let alone abroad, since 2009. Since the retirement of Muttiah Muralitharan, it has been a struggle for Sri Lanka, although there were a few sparks – such as the historic victory against South Africa at Durban and the one over England at Galle. Given its recent history, Sri Lanka’s 1-0 victory against a good Pakistan side would do their confidence a world of good.

While Mahela Jayawardene and his men celebrated the triumph, the world asked a very intriguing question: Why didn’t Sri Lanka go for the kill in the final stages of the third Test? With 270 to get from 71 overs, a 2-0 series victory looked possible. Dinesh Chandimal and Kumar Sangakkara led the way with good half centuries to further hopes of a result. However, a few wickets put Sri Lanka on the back-foot and they then held on for a draw.

Although, a sustained Sri Lankan charge towards the target would have made the final day of the Pallekele Test more interesting and made a good advertisement for Test cricket, the hosts were justified in their approach. A 1-0 lead isn’t a very formidable one and an all-out positive approach could have back-fired and allowed Pakistan back. The safer option was to draw the game as the series would have been in the bag and there wouldn’t have been a risk of sharing it with the opposition.

It is a fair call because the series was in the balance, but had Sri Lanka led 2-0, they should have marched towards the total. In such a scenario, with the trophy in hand, they would have had nothing to lose and a run-chase would have done no harm whatsoever. To illustrate this argument, let us revisit two Test matches featuring India (both against the West Indies) in 2011 as they present the two contrasting setups.

In July 2011, India were touring the Caribbean and led the Test series 1-0 going into the third Test at Dominica. India were in control of proceedings until Shivnarine Chanderpaul and Kirk Edwards batted West Indies out of trouble. On the final day, India needed 180 runs in 47 overs. The conditions weren’t very easy to bat as the Indian batsmen couldn’t push the tempo. As a result, India settled for a draw with 15 overs to spare. The critics were baying for the India’s blood as they had seven wickets in hand and had to score at around six runs an over in the final 15 overs. However, given the precarious nature of the series, it was the right decision as India had to secure the series.

Fast forward to November 2011, a boring Test match at Mumbai was meandering towards a draw until an idiosyncratic West Indian collapse on the final day put India in the fray for a victory. India had to achieve a target of 243 in 64 overs on a tricky on Day Five wicket. It was an enthralling finish with as West Indies fought hard for a draw with scores level. It was a completely different approach from the same Indian team that settled for a draw in the Caribbean. It is safe to assume that the unassailable 2-0 lead going into the Mumbai test played a pertinent role in making it an eventful final day. India had the incentive to push for a 3-0 victory and a defeat wouldn’t have been disgraceful.

To conclude, there are two sides to the coin and the jury would be divided on the question of the better one. With a 1-0 lead, there is always a fear of losing at the back of one’s mind and it naturally affects the run-chase. However, with an unassailable lead, the whole mindset changes as a clean sweep is there for the taking. 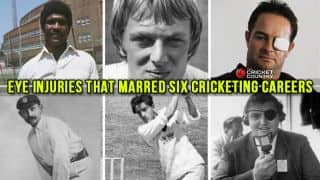 Six cricketers who were victims of eye problems