Sri Lankan team is all set to debut an extremely mysterious off-spinner, KYNTPC Azimuth, in the second Test against arch rivals India.

In keeping with a glorious tradition of unleashing “mystery spinners” at the highest level of the game at opportune moments against naïve, mentally brittle opponents, the Sri Lankan team is all set to debut an extremely mysterious off-spinner, KYNTPC Azimuth, in the second Test against arch rivals India.

“We have kept KY [Lankans fondly refer to their teammates by the first two of many initials] wrapped in cotton wool thus far, resisting the temptation to unleash him against the Pakistanis earlier. We wanted to save him for the Indians and with us 1-0 ahead, it is time to go in for the kill,” Sri Lankan skipper Angelo Mathews sent out an ominous warning to the Indian camp.

The 20-year-old KYNTPC Azimuth is purported to possess a highly unorthodox, freaky bowling action and is considered “very difficult to read” in domestic circles. He bowls the usual assortment of off-spinners, top spinners and leg-breaks, with different grips and actions, but also possesses this extremely weird ball that is not quite the carrom, not quite the doosra, not quite the flipper.

“We’ll have to coin a new name for it, really. It dips in gently, breaks short of a good length, and can turn either way or go straight on to completely mesmerize the batsmen who always have that deer caught in the headlights look after he has bowled it,” revealed Sri Lankan commentator, Russell Arnold. “I predict a great debut for him followed by an IPL contract after which he should become more readable and generally pedestrian. But before that, he’d have his done his job for his team and country.”

Needless to say, the move has struck terror in the hearts of the Indian camp, with Rohit Sharma also developing a hairline feature and ruling himself out of the rest of the series, while Virat Kohli has requested the presence of Anushka Sharma to calm frayed nerves. Ravi Shastri tried to put up a brave front saying the boys will continue to play aggressive cricket but his tone betrayed his apprehensions about the looming threat.

“At least can’t they tell us what KYNTPC stands for to clear some fog in our brains?” a worried Indian batsman was heard complaining. But the Sri Lankans are wisely keeping their trump card close to their chest. 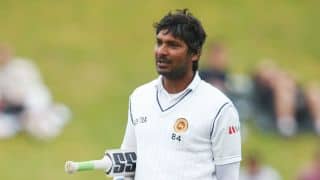