Sri Lanka did not quite have the ideal resources, but they made it up with spirit.

September 11, 1985. The minnows of the cricketing world, Sri Lanka, pulled off their first ever Test win by beating India comprehensively at Colombo. Arunabha Sengupta relives the match that marked the coming of age of Sri Lankan cricket.

They were a driven lot

The Sri Lankans believed they could win. Before the series they had played just 12 Tests in three and a half years, and generally had the worse of exchanges. But they were a committed unit. They wanted to win. They wanted to prove that they were ready to be recognised as a force to reckon with.

They did not quite have the ideal resources. But they made it up with spirit.

Woefully short in the spin department, the islanders banked on the unusual policy of accurate medium pace. The wickets were prepared for seam bowling, and made it a toil for the battery of Indian spinners. The Lankan line was always on the off and middle, and the ball was moved away from the bat — a strategy devised with considerable thought. The Indian batsmen, many of them formidable on paper, were caught napping by the ploy.

In contrast the home batsmen stood solid like solid pillars — from keeper Amal Silva who opened the innings with gusto to the immensely experienced Ranjan Madugalle who till then had not missed any Lankan Test. There was exciting young talent in the form of two youngsters named Arjuna Ranatunga and Aravinda de Silva. And then there were those two classy rocks in the middle, in the form of Roy Dias and Duleep Mendis. Till the final innings of the tour, the Indian bowlers were still trying to figure out how to bowl to these two.

Finally there was the menacing form of Rumesh Ratnayake. With the conspicuous band around his forehead, this young bowler ran in to generate disconcerting pace and moved it around to trouble the world class batting side of their vaunted neighbours. India, fresh from the triumph at the World Championship of Cricket in Australia — in days when teams in the different formats were not that different — sleepwalked through a horrid tour.

The rookie nation had looked set to win the first Test at Colombo after rocking the Indian second innings on the fourth afternoon and the fifth morning. However, a six and three quarter hour vigil by Dilip Vengsarkar and some tropical thundershowers had left them with less than enough time to score the required 123 runs. But, the match had injected the belief that success was achievable and close by. It had also given Ratnayake five wickets and promise for much more.

When they arrived at P Saravanamuttu Stadium, Colombo, the hosts were brimming with confidence.

Some atrocious catching by the Indians helpfully set them up for a respectable total. The top order batted at glacial pace, but the torrent of triumph was being stored up to be released in a deluge. Amal Silva grinded his way to a hundred, Madugalle dourly notched up a half century, the first day ended at an excruciating 168 for 1. Laxman Sivaramakrishnan, the conquering leggie who had kick-started his career with immense success against England at home and then in the tournament in Australia, found himself neutralised and blunted.

On the second day it was the old duo of Dias and Mendis who took the game away. Dias drove delightfully on his way to a sparkling 95 while the pugnacious Mendis toted up yet another half century. There was a collapse, with the score plummeting from 368 for 4 to 385 all out — much of the damage done by Chetan Sharma and Ravi Shastri. However, the Sri Lankans were not too dismayed when they saw Krishnamachari Srikkanth and Lalchand Rajput walking out with just a few minutes remaining for stumps.

Sunil Gavaskar had declared his intention to enjoy the game by batting in the middle order, and this curious ploy, incredibly indulged, now backfired. By the end of the day, Rajput and Mohammad Azharuddin were caught off snicks and Vengsarkar snapped up in the gully off a leading edge as he tried to turn a ball towards the leg. India ended the day at a dismal six for 3. Ratnayake, having accounted for Azhar and Vengsarkar, walked back with a wide smile.

The next morning saw Srikkanth try to hit his way out of trouble. He succeeded to an extent, scoring 64 of 79 as night-watchman. Siva stubbornly held up one end. After Ratnayake came back to scalp the leg-spinner, Gavaskar and Mohinder Amarnath dug deep roots into the wicket, putting together 90 in more nearly four agonising hours. The two most experienced Indian batsmen produced the least entertaining phase of the game, and their inability to get on top of the bowlers went a long way in boosting the confidence of the young unit. All through, Asantha de Mel, Ratnayake and Saliya Ahangama stuck to a superb line outside the off-stump.

The plodding partnership ended when Gavaskar tried to break the shackles by charging down the wicket to schoolboy cricketer Ranatunga’s occasional gentle medium pace. He missed and was stumped for 54 scored over four hours. The middle order experiment was definitely not working for him. India ended the tedious day at 210 for 6.

The blows are struck

They did not add too many runs the following morning. The three seamers pried out the last 4 wickets for 34 runs and the hosts led by 141.

The need of the hour was to force the pace to declare early, and it was the ideal situation for the dashing young Aravinda de Silva. Promoted to No 3, he launched into the bowling, striking nine fours and two sixes in his 75 — a precursor of things to come in the next decade and a half. Dias guided him with a quick and polished 60. When Mendis closed the innings, there remained a day and a bit were left for the Indians to survive. Alternatively they could attempt to score the 348 runs in 333 minutes and 20 mandatory overs.

And then there was controversy.

Rajput and Srikkanth fell to leg before decisions, at least one of them rather dicey. At 41 for 2 Vengsarkar wafted his bat at a delivery from Ratnayake down the leg side. Silva’s take was followed by an appeal, a raised finger and a flabbergasted batsman.

The umpiring had not really been flawless. In the match there were 20 calls of no-ball against Indian bowlers and only six against the Sri Lankans and it led Indian captain Kapil Dev to fume about home advantage. However, to be fair, there were three leg before decisions against each team, and none of the Indian batsmen in the first innings had fallen to that mode of dismissal.

The wickets invigorated the crowd and charged up Ratnayake. Having already accounted for Srikkanth and Vengsarkar, the fast bowler worked up impressive pace and got rid of Gavaskar and Amarnath. Azhar was dismissed by de Mel and Shastri snicked Ahangama. India tottered at 98 for 7.

The man least suited to essay a match saving-knock now made an attempt. Kapil refused to give up. Siva, nursing a broken thumb, proved an obstinate batsman yet again. The two delayed the inevitable for 85 minutes, adding 70, before the experienced de Mel induced an edge off the leg-spinner.

In walked Siva’s great friend wicketkeeper Sadanand Viswanath, and was sent back by Ahangama after just three balls. In a final act of defiance Kapil lashed out to add 29 for the final wicket with Chetan Sharma for company before pushing one from Ratnayake uppishly back down the wicket. The bowler dived across the pitch to hold a magnificent return catch. The stadium erupted and the Sri Lankan cricketers converged on the sprawling bowler. The island nation had won their first Test match.

Kapil, walking back crestfallen after a fighting 78, was not very amused with the result. Later he confided to Sportstar that the tour had been arranged without adequate preparation. “We did not perform too well because of lack of practice. We just did not know whether this tour of Sri Lanka was on or not. We were not mentally prepared for the ordeal.”

Indeed, the series was played as a hasty acknowledgement for Sri Lanka’s support during India’s bid to host the World Cup of 1987. The political unrest in the island also raised several doubts over whether the tour would indeed take place or not. The experienced Indian side could have indeed been fallen prey to the uncertainty and lack of preparation. However, Kapil’s remarks do sound churlish. It was a wicket made to order for the seam bowlers and while Ratnayake, Ahangama and de Mel took 19 Indian wickets, the Indian captain only accounted for the scalp of Silva in the second innings.

The Sri Lankans, however, had no cause for anything other than celebration. It had been a stupendous achievement, a spectacular show by the whole team with some excellent individual performances standing out. Dias with 95 and 60 not out and Silva with an unprecedented combination of a century and nine catches had entered the annals of the island’s cricketing history, but the hero of the moment was Ratnayake with his 4 for 76 and 5 for 49.

Singed by humiliation, the Indians pushed for a win in the third and final Test at Kandy, but did themselves no favours by scoring at less than three an over in the first innings. Some inspired bowling by Maninder Singh and a second innings hundred by Amarnath gave the Indian bowlers eight hours to bowl out the Sri Lankans.

Three wickets fell for 34 but there was that familiar duo of Dias and Mendis. They remained unseparated for five hours and the Indians still had not found out the way to bowl to them.Twin centuries by these pillars of Sri Lanka ensured a memorable draw and the first series win for the nation. 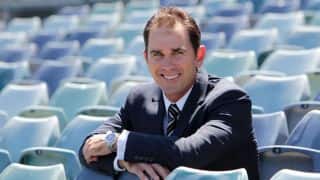