In the last group match of the Ranji Trophy 2014-15 at Ongole, Andhra’s wicketkeeper and opening batsman Srikar Bharat scored a remarkable 308 runs off 311 balls that included 38 fours and six sixes. He had major partnerships of 164 runs with his fellow opener Prashant Kumar and of 333 runs stand with Muramalla Sriram, the number three batsman.

On his route to 308, Bharat became only the second batsman to score a double-century for Andhra in First-Class cricket, surpassing Amit Pathak’s 264 as the highest individual score for Andhra in Ranji Trophy as well as in overall First-Class cricket. When he reached 283, Srikar Bharat overtook Sagar Jogyani’s record of highest individual score as a wicketkeeper in Ranji Trophy.

When he reached the triple century mark, Bharat became only the fifth player in the history of First-Class cricket to score a triple century as a wicketkeeper and the first to do in Ranji Trophy.

–          Imtiaz Ahmed, born in Lahore, Pakistan, played First-Class cricket in India till Independence and then moved to Pakistan after the partition.

Individual innings of 250 or more in Ranji Trophy

–          Abhinav Mukund is the third-youngest First-Class triple centurion and second youngest from India. Bharat is the fifth youngest Indian with this feat.

The first player to score a triple century for any South Indian team was Abdul Azeem for Hyderabad against Tamil Nadu in 1986-87. 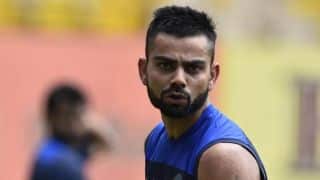