Srikkanth may be Gavaskar's favourite opening partner, but best?

Srikkanth may be Gavaskar's favourite opening partner, but best?

Sunil Gavaskar has been quoted saying that Krishnamachari Srikkanth liberated him as a batsman. While there are indications to believe so, Arunabha Sengupta wonders whether the reports of his identifying Srikkanth as his best opening partner were somewhat misconstrued. Sunil Gavaskar has been quoted saying that Krishnamachari Srikkanth liberated him as a batsman. While there are indications to believe so, Arunabha Sengupta wonders whether the reports of his identifying Srikkanth as his best opening partner were somewhat misconstrued.

We do have fond memories of Sunil Gavaskar’s farewell season. And yes, the lasting impression is of the man under the floppy hat walking out to bat with the idiosyncratic, swashbuckling Krishnamachari Srikkanth.

They had their moments in the sun too that final season, adding 200 against Imran Khan and Wasim Akram in the Chennai Test. And of course, there was that 136 run frolic at Nagpur in the last league encounter of the Reliance World Cup as the legendary opening batsman raced to his one and only century in One-Day Internationals (ODIs), finishing with 103 off 88 balls.

Hence, when Gavaskar was cornered by pressmen in distant Toronto and was quoted as saying that Srikkanth “liberated” him as a batsman, we tend to nod in agreement. It is of course easy to believe that the peculiar approach of the dasher at the other end was instrumental in releasing Gavaskar from the fetters of traditional batting.

And then in the media world, the alchemy of wishful retelling can work its magic, transforming the quote into “Sunil Gavaskar rates Kris Srikkanth as his best opening partner.” Hard as one might look, it is impossible to find quotation marks around the statement in the PTI article – which makes one wonder whether or not it has been a harmless extension of what he actually said. After all, one just has to look at the infamous “Dhoni alone didn’t win us the World Cup” headline to experience the extent of creative imagination at play when life is breathed into a news item.

An analysis of liberation

Indeed, Gavaskar’s strike rate in the shorter version did increase to 65 whenever he batted with Srikkanth, while it slumped to 56 otherwise. It might have been the result of steadily adapting to the overs-limit format from the early 80s. But, the sight of Srikkanth at the other end, with his peculiar wide stance and strokes that casually and emphatically launched caution to the winds,  could well have tampered with the famed mindset of correctness to allow innovation pour forth in the master’s batting.

Yet, if one looks at the most adventurous of Gavaskar’s innings, those that came in the more challenging circumstances of Test match cricket, one cannot help wondering about the true extent of the Tamil Nadu batsman’s influence.

Gavaskar’s first foray into scintillating, yet short-lived, stroke-making was during a short innings in Australia for the Rest of the World when Srikkanth was still in his shorts. Soon, however, he bartered his attacking aspirations to become the main line of defence against foreign attacks, shielding the often fragile middle order from the perils of the new ball.

Occasionally he did get back into the mood for dominance. In the 1980 Jubilee Test against England at Mumbai’s Wankhede Stadium, he belted 6 fours and a 6 in his brief un-Gavaskar-like innings of 49. His opening partner that day was – of all people – Roger Binny. According to Gavaskar’s own confession, the inspiration behind his colourful approach that day was the presence of Syed Mushtaq Ali, the yesteryear dasher, in the pavilion.

And when he was in the most attacking phase of his career, against the West Indian fast bowlers of 1983, especially during two gems essayed at Delhi and Ahmedabad, it was the bespectacled Anshuman Gaekwad who played second fiddle at the other end.

In Test matches at least, when Srikkanth was around and — in pretty rare occasions — actually making runs, Gavaskar seldom traded his powers of concentration for the spirit of adventure.

In retrospect, it makes sense to believe that Gavaskar always harboured the instincts of bravado in him, kept them perennially repressed, in perpetual hankering to break out of the chains of limited batting riches around him. In the final few ODIs, Srikkanth’s presence might have propelled this dormant force to come to the fore, finding full expression in scintillating stroke-play.

An analysis of quality

However, when one comes across the unattributed assertion about Srikkanth being the best opening partner he ever had, one is forced to look quizzically.

In Test cricket, and Gavaskar would never judge quality otherwise, Chetan Chauhan stood staunch, stoical and often stroke-less beside him to put on 3,127 runs — an aggregate surpassed by the original master only in his celebrated associations with Dilip Vengsarkar. Gavaskar and Chauhan made these runs at an average of nearly 55, with 11 century partnerships.

While Chauhan helped Gavaskar take the shine off the ball in distant, dangerous lands, adding 213 during that famous Oval chase, 124 at Birmingham, 192 at Lahore, 165 at Melbourne and 114 at Christchurch against various attacks of versatility and venom, the one substantial overseas stand with Srikkanth came against a toothless Australian attack at Sydney in 1985-86.

And although Gavaskar was hardly involved in any opening liaison to compare with his time in the middle with Srikkanth in ODIs, their overall figures read 1680 runs in 55 matches at an average of just 30.

It somehow does seem difficult to believe that Gavaskar would indeed have voiced the opinion that Srikkanth was his “best opening partner”.  Favourite, yes – undoubtedly. Maybe the most comfortable to bat with — and one who let his own buccaneering spirit rub off on him. But, best? Not by any stretch of imagination.

Harbhajan Singh thanks BCCI, selectors for showing faith in him 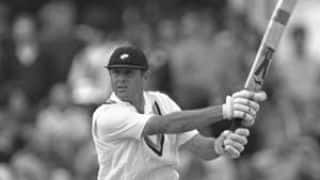