Life is never a constant; it’s a series of successes and failures. One day you win, the other day you may not. However, the key is not to panic when you fail. Rather, look back at your actions and learn from your mistakes. It is unforgivable that a failure is not taken as an opportunity for improvement. Life is never a constant; it’s a series of successes and failures. One day you win, the other day you may not. However, the key is not to panic when you fail. Rather, look back at your actions and learn from your mistakes. It is unforgivable that a failure is not taken as an opportunity for improvement.

England’s tour of the United Arab Emirates (UAE) has been an excellent example of that truism of life. After a 3-0 whitewash in the test series, no cricket pundit gave England a chance in the ODIs.  The odds were stacked heavily against them. England took this as an opportunity to re-assess their game and played with more resolve and determination to come out on top as the better side.

Most experts suggest that a team is the embodiment of their coach’s personality. All great men fight harder when the going gets tough and good coaches have the skill to instill in their players the confidence and willingness to win. No other team is a better example of this than England.

Ever since Mohsin Khan has taken over as Pakistan’s coach, Pakistan has tasted success. But the real test of a coach is when his soldiers are down, wounded and shattered in confidence. This is a testing time for Mohsin Khan and Misbah ul Haq. Imran Khan would probably tell you the same: A great leader is one who has the ability to stand up and fight, especially when the chips are down.

It is true that Pakistan were beaten by England in batting, bowling, fielding and most importantly captaincy. But it is important to analyse every aspect of Pakistan’s defeat to learn why England did well and why Pakistan surrendered so easily.

This week Cricketing Minds has analysed the 4-0 whitewash of the Pakistan team against England.

The graphs below show the total runs Pakistan and England scored and total wickets lost in different stages of the game. 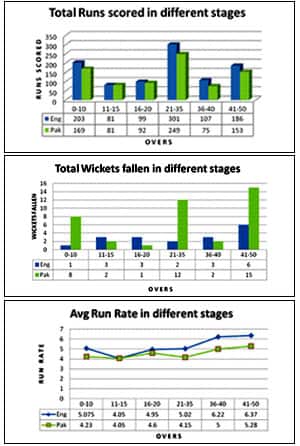 England dominated the first 10 overs by scoring 203 runs for the loss of just 1 wicket in the four ODIs combined at 5.075 runs per over. Once known as the best in the business for picking up early wickets, Pakistan are now struggling in the fast bowling department. England on the other hand has found an excellent opening partner in Kevin Pietersen for Alastair Cook.


During the same stage of the game, English bowlers were able to pick up eight Pakistani wickets at a cost of 169 runs only. It matters less that four of these wickets came in the first ODI itself and Steve Finn was the chief destroyer, picking up six of these wickets. Once again that shows how superior the English fast bowlers performed compared to their counterparts when it came to utilizing the new ball.

This is the stage when Misbah ul Haq employed his strike bowlers Shahid Afridi and Saeed Ajmal who were able to contain England and also pick up wickets. But Pakistan was unable to maintain the pressure in the next stage.

In ODIs, the most important phase of the game is the middle stage (Overs 21-35) where a game is usually decided. Unfortunately for Pakistan, they lost 12 wickets during this stage of the game which had a major impact on their run-rate as well. England, on the other hand, mastered the middle stage play with the bat by scoring over 300 runs for the loss of just two wickets at 5.02 runs per over (RPO).

For Pakistan to win ODI games, their batsmen have to put a higher price on their wickets and place an importance of occupying the crease during these middle overs. Their only decent performance during this stage of the game came in the 3rd ODI when they scored 68 runs for the loss of only one wicket.

Because Pakistan had already made a mess of their batting by the end of the 35th over, the following stages mattered less because by the start of the 36th over (mostly with the batting powerplay) Pakistan would be at least four wickets down already. [Breakdown of Pak’s scores at the end of 35th over: 130/10, 151/4, 157/5 and 153/4].

Entering the batting powerplay and last 10 overs with four-five wickets down restricts the batsmen to play their shots and not make the best use of the fielding restrictions.

Hence, only two things can happen as a result:

(ii) Play defensive cricket and let the run rate to drop even further which puts extra pressure to accelerate during last 10 overs.

The best way to counter this problem would be to keep at least seven-eight wickets in hand when entering the last 15 overs. Which is exactly what England did and hence they were successful throughout. [Breakdown of Eng’s scores at the end of 35th over: 169/2, 154/2, 203/1 and 158/4].

This table shows the per centage of runs scored in boundaries by each batsman. It must be a shame for Umar Akmal to sit at the bottom of this table despite being known for his aggressive nature. It’s surprising to see Malik and Misbah at the bottom as well. Malik has not been able to middle the ball ever since his forceful comeback. Misbah on the other hand needs to find innovative ways to score more boundaries and rotate the strike in ODIs rather than his usual ‘tuk-tuk’. Defensive play may bring him success in Tests, but Mohali 2011 should have been a lesson for him that the ‘tuk-tuk’ strategy mostly fails in ODIs.

Partnerships are crucial in any format of cricket. I am not sure why the Pakistan batsmen fail to acknowledge the importance of partnerships in ODIs. Pakistan’s best partnership came in the last ODI when Azhar Ali and Asad Shafiq added 111 for the 2nd wicket. What is noteworthy here is that there were only four 50+ partnerships for Pakistan during the four ODIs. Whereas, England had nine 50+ partnerships.