India have done better in ODIs than Tests, especially against teams other than England.

India suffered a crushing 1-3 defeat against England in the Test series. They now play a five-match One-Day International (ODI) series against England. Bharath Seervi does a statistical review of India’s past performances in England.

India have had some of the most glorious moments of their ODI history in England. Their World Cup win in 1983 under Kapil Dev, the Natwest Tri series win in 2002 under Sourav Ganguly and the Champions Trophy victory in 2013 under MS Dhoni all came in England. However, they had some sub-par tournaments there as well, such as the World Cups of 1975 and 1999. India have won three of the seven tournaments involving three or more teams in England. In bilateral ODI tournaments in England, they won only one of the eight series they have played since 1974.

India played a total of 62 ODI matches in England with 29 wins and as many losses. Among the 62, they played 34 matches against England which brought them 12 wins and 18 losses.

Indian batsmen in ODIs in England

Indian batsmen have performed better in ODIs than in Tests, especially against teams other than England. In the 1983 World Cup, Kapil Dev hammered 175 not out against Zimbabwe, which is considered among the best ODI innings in World Cup. In the 1999 World Cup,  Ganguly scored a record 183 runs along with Rahul Dravid’s 145 runs against Sri Lanka at Taunton. They had a partnership of 318 runs, which was the first ever partnership in excess of 300 runs in ODIs. Three days earlier, Sachin Tendulkar had scored 140 not out while Dravid had made 104 not out against Kenya at Bristol in a partnership of 237 runs. Dravid was the highest run getter in the 1999 world cup with 461 runs at 65.85 in 8 matches.  Only two centuries have been scored by Indians against England in the UK — by Sachin Tendulkar (105 not out at Chester-le-Street, 2002) and Virat Kohli (107 at Cardiff, 2011). Shikhar Dhawan scored two centuries in the ICC Champions Trophy in 2013, but neither were against England. Ajay Jadeja is the other centurion for India in England. He scored 100 not out against Australia in the 1999 World Cup though India lost the game.

Indian bowlers in ODIs in England:

Indian bowlers had some memorable spells in ODIs in England. Most of them from the World Cup of 1983 involving Madan Lal, Roger Binny, Kapil and Mohinder Amarnath. Indian bowlers have managed to take four five-wicket hauls in ODIs in England — one each by Kapil Dev, Robin Singh, Venkatesh Prasad and Ravindra Jadeja. Among the nine four-wicket hauls by Indians in England, only one came against England — Ajit Agarkar took four for 60 at Manchester in 2007 but India lost the match. Madan Lal and Roger Binny took four wickets each against Australia at Chelmsford in 1983.

Best bowling by Indians in England: 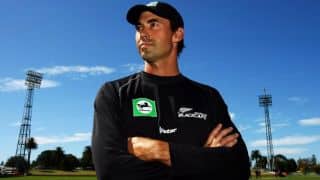