Only twice in the history of Test cricket, three batsmen scored more than 150 runs in the same innings for a team.

For the first time in the history of One-Day International (ODI) cricket, three centuries were scored in one innings during the South Africa versus West Indies clash at Johannesburg. Bharath Seervi lists down similar instances in Test innings and Tests.

Hashim Amla scored an unbeaten 153 and his partner. Rilee Rossouw got out after scoring 128 runs just before the 40th over. It was highly unexpected that one more batsman would score a century with just about 11 overs left in the innings. But AB de Villiers made it possible; in fact he scored 149 runs off just 44 balls. This turned out to be the first instance of three centuries by the batsmen of same team in an ODI.

In Test cricket, there have been many occasions when three players scored centuries (147 times). Let us see what were the highest scores by batsmen that could end up only as the third highest score among their team mates and in the whole Test?

Only twice in the history of Test cricket, three batsmen scored more than 150 runs in the same innings for a team. The first was in The Ashes 1938 at Kennington Oval, where Len Hutton scored364 runs. It was followed by Maurice Leyland’s 187 and then Joe Hardstaff also scored big at the bottom, 169 not out. The second occasion was at Kanpur in December 1986, as for India, Sunil Gavaskar scored 176, Mohammad Azharuddin 199 and then at the end, Kapil Dev scored 163.

Therefore, Joe Hardstaff’s 169 is the highest ‘third highest’ score in a Test innings followed by Kapil Dev’s 163. The table below has more details.

Highest ‘third highest’ score in a Test inning (130 or more)

There have been 13 instances when the third highest scorer scored between 125 and 130 runs. In the above table, four occasions have been for South African team with almost similar batsmen since 2000. Among the 13 occasions listed in the table, nine have been since the year 2000.

There have been two Tests in which three batsmen scored double centuries. Therefore, a score in excess of  200 has been the highest ‘third highest’ score in a Test match. The table below has the list.

Highest ‘third highest’ score in a Test match (160 or more)

In 1964/65 at Kensington Oval in Barbados, Bill Lawry scored 210 and his opening partner Bob Simpson scored 201. In reply, Seymour Nourse also scored 201 which was identical to Bob Simpson’s. Since the second highest score is tied, it is not listed in the above table.

There have been 12 other Testsin which the third highest score by the batsman was between 150 and 160. 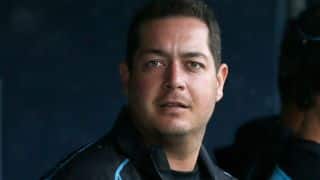