Nottinghamshire vs Surrey was abandoned without a ball bowled, but...

Stephen King chanced to be at Trent Bridge on August 22, 1998 on Dickie Bird’s invitation. As Amritorupa Kanjilal explains, what followed at the Sunday League match between Nottinghamshire and Surrey was not the way things were supposed to be like.

Stephen King looked impassively out of the airport lounge window and wondered what he was doing. He had three interviews the next day, and a state wide book tour later in the week. Having spent four months holed up in Bangor with his latest novel, it was exactly the right time to come out into the world again, to remind millions of fans that he, Stephen Edwin King, was still around, still writing, still able and willing to chill readers to their bones.

Instead, here he was, waiting to catch an overnight flight to Nottingham, looking to spend the next couple of days in the old country with strangers who had never heard his name. It was Tabitha’s doing, mostly. She had some sort of an idea that it would be good for him to get away from all the madness for a bit, to see some new places and meet some new people, and Tabitha was usually right. Bag of Bones was one of the most draining novels he had written in recent years, and having poured all of his imagination into it, he felt unusually blocked, much like the protagonist of the novel, Mike Noonan. It took a haunted house, a failed love affair, and several malevolent ghosts to break Mike’s writers’ block. Maybe a trip to England to watch a game of cricket would work for King.

And there was Dickie Bird, of course. Months of correspondence with the legendary umpire had crystallized in King’s mind the desire to meet this enormously interesting individual with a wickedly British sense of humor. That, and the fact that several people, Tabitha included, had pointed out the physical resemblance between the two. King took out the well thumbed autobiography from his trench coat pocket and squinted at the photo on the cover. He could see it himself, the same crinkled eyes, the same pursed upper lip, the same toothsome half-grin. It was eerie, and Stephen King loved eerie. Would it be like meeting a long lost twin, he wondered, or meeting a doppelganger who would be his nemesis? The seed of a new story shifted restlessly in his mind.

It was a very cloudy morning in Nottingham when King stepped out of the airport. As his cab made its way to Trent Bridge, King realized that in all his visits to England, he had never seen an actual sunny day. In this, the country was very like his own state of Maine, and he felt comfortingly at home.

Bird was waiting for him at Trent Bridge, impeccably dressed for early autumn, and armed with a gigantic umbrella. As the two men shook hands, King realized it was nothing like meeting a twin or a doppelganger. For one thing, the Briton was half a head shorter than him. All the same, as they made their way to the stadium in the light drizzle, he noticed he was glowing from inside, as he often did when in the company of a good friend.

There was a great deal of chaos in the stadium when they reached it. The drizzle had strengthened into fat, plopping drops, and the match was postponed till it cleared. Half the countryside seemed to have turned up, with beer bottles and picnic baskets in hand, but no one seemed to be very bothered about the fact that the game could be cancelled altogether (they must be very used to it in this country, King thought to himself). Instead, people seemed to be totally chuffed to be able to interact with the home team. Nottinghamshire‘s players mingled happily with the crowd, sharing a bottle of beer here, signing autographs there. The players from Surrey too were being fawned over by a number of pretty young things. There was much singing and jolly cussing, and Bird noted with a laugh that the whole thing had turned into a huge picnic.

King felt strangely dwarfed. It had been a long time since he had tasted incognito. All these people, buzzing with adulation for 22 men in white, none of them knew who he was. It was humbling, and to tell the truth, a bit of a relief.

When the downpour made it obvious that no cricket would be played that day, Bird, chaffing King about his bad luck, led him to the dressing room to meet the players. King had his autograph book ready, these were the gods of this holy ground today and it was unseemly to not pay homage. But when he stumbled in after Bird, he was rendered speechless. Two dozen adult men in white, rain drenched with scruffy beards and hair, had formed a line, each clutching a book in hand. Behind them was a huge banner with his face on it, and a single line:“The King of Horror- welcome to Nottingham!”

“You didn’t really think no one would know you here, did you?” Bird sniggered next to him.

King signed several copies of The Shining, Carrie, the Dark Towers series, and his last novel Desperation that day. Afterwards, sitting down with the team for lunch, he heard their stories, how they had grown up with his books, how his tales had scared them witless but given them courage all the same to follow their dreams. He left with a solemn promise to send to each player a signed copy of Bag of Bones as soon as it was released.

On their way out, Bird and King stood for a while on the pitch under the giant umbrella, ridiculously called brolly, as Bird spoke about the game. His quips were witty, his telling droll, but King saw through his words his deep love and passion for the game, and his pride at being associated with such regal lineage and history. King smiled. Tabitha had been right. Suddenly, where there had only been a blocked pipe, a hundred ideas had begun dancing again.

–  Bag of Bones was released in September 1998 and turned out to be one of King’s most popular and well-loved books ever.

–  Less than a year from the date of this incident, Stephen King was horrifically injured in a car accident and took the decision to retire from writing. It may have been his own restlessness that made him change his mind eventually, or the clamour of his fans, but we, the horror loving fans of cricket (or cricket loving fans of horror, if you will) will continue to hope that maybe, the adulation that King received from the giants of Nottinghamshire on that squally August day played its part too.

–  Tabitha King has been married to Stephen King for 43 years.

Nottinghamshire vs Surrey: Match abandoned without a ball bowled.

(Amritorupa Kanjilal was a corporate shark before she decided she would be much happier being a goldfish, blowing bubbles in her little bowl. She lives in Kolkata, India, and reads too much for her own good. When she isn’t reviewing the hell out of books, she works on ideas for her novel, and makes tiny sculptures from construction putty. Let her recommend a book to you at Rivers I Have Known: Books, Reviews and More, or urge her to share her witticisms more often at Twitter) 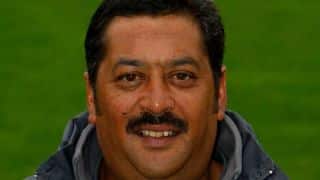 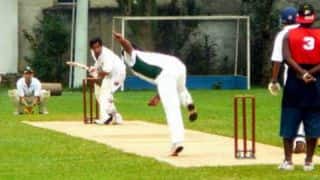