Never before had Steve O Keefe taken more than 3 wickets in an innings. Today he took 3 for 1 in 5 balls.

When the teams broke for lunch on Day Two, it seemed India had gnawed their way back in the Pune Test. First, they ended Mitchell Starc s blinder. Though the 55-run last-wicket stand hurt India, bowling Australia out for 260 was certainly an improvement after Matt Renshaw and David Warner had put on 82. Starc struck again, removing Virat Kohli no less for a 2-ball duck after getting Cheteshwar Pujara with a snorter. However, KL Rahul held firm, and India went to lunch at 70 for 3. They marched on after lunch, Rahul and Ajinkya Rahane, taking the partnership to the fifty-mark, Rahul going past fifty, then sixty: India trailed by 166 with 7 wickets in hand when Steve O Keefe strode in to bowl the 33rd over of the match.

Australia were routed 0-3 in Sri Lanka. They had carried O Keefe as their left-arm spinner. They had expected him to thrive on pitches where Rangana Herath would torment them throughout the series. O Keefe, introduced ahead of Nathan Lyon at Pallekele, set up Angelo Mathews beautifully, varying pace and flight ever so subtly before getting one to take off and dismiss him. He was beautifully deceptive despite his role as a support bowler. There were indications of him establishing himself as the series went on. Unfortunately, he hobbled out of the series with a pulled hamstring.

This was different. He was the least glamorous of the quartet. Even Lyon had attained cult status of late with his newly-acquired nickname. Steven Smith had tossed the new ball at him, but he made little impact. He retreated into the field, licking his wounds, waiting to have another go as the pitch wore down further.

O’Keefe’s first 9 overs had fetched him nothing. He had a loud appeal against Pujara, but that had more to do with Pujara misjudging the line. He had been hit over his head for six by Rahul. Barring the occasional ball that squared up batsmen, O Keefe had barely done justice to his talent.

Had he been bowling from the wrong end all along? Perhaps. Smith replaced him with Lyon. Two overs later Starc was taken off. O Keefe replaced him.

There was nothing spectacular about the first ball. The usual probing flight met with a gentle push by Rahul.

And then Rahul had a brain-freeze. He tried to loft O Keefe somewhere over long-off, perhaps into the stands. He had attempted that before, so why not try an encore? Why let O Keefe dominate? Why not hit him out of the attack?

Whether O Keefe had anticipated it is not known, but he certainly held it back. He tossed it up but made sure it dipped before the batsman had anticipated it. Angelo had been troubled on a less vicious pitch, so why not Rahul, who had made up his mind already?

David Warner took the catch at long-off. Rahul had injured his shoulder in the process, which meant that Rahane never had a chance to get on strike.

By now O Keefe had his tail up. There was a new batsman on strike. India were under pressure. He had the licence to toss it up. Not that it bothered Ravichandran Ashwin, who casually strolled across for a single.

O Keefe gave it the ball some air again. Rahane tried to flick. Trying to play a ball against the turn on a deteriorating track is not a recommended option, but Rahane is typically up to such challenges.

Unfortunately, it took the leading edge and flew towards the slips. As it often happens with leading edges, Peter Handscomb saw the ball at the last moment. The ball dipped, but not as far as Handscomb s outstretched fingertips. A disbelieving Rahane walked back after the umpires confirmed.

Wriddhiman Saha pushed the first ball calmly. O Keefe decided to bowl with the arm. The ball pitched on middle-stump, leaving Saha guessing till the last moment before he tried to prod. The ball bounced off Matthew Wade s glove to slip.

Never before had O Keefe taken more than 3 wickets in an innings. Today he took 3 for 1 in 5 balls.

Lyon bowled a maiden at the other end. It included a ball that took Ashwin s bat before bouncing off his boot. The ball rose slightly, but it was enough for Handscomb to pull off his second stunner in six balls.

But this was not going to be Lyon s day. This was O Keefe s day. It was a different challenge this time, for he was up against a left-hander. O Keefe switched to over the wicket.

The first four balls passed without much harm. Jadeja had probably made up his mind before the fifth. After all, there was no point in holding one end up.

Had O Keefe anticipated it? Once again he held it back. Just like Rahul, Jadeja did not reach the pitch of the ball. Fortunately, he missed it completely, and got hit somewhere below the solar plexus.

At the other end Lyon, now reduced to a support role, nearly got Jayant Yadav twice. Jadeja got a run off the second ball.

This time Jayant fell prey to that mesmerising loop. He got sucked into a forward defensive stroke when he should not have, for once again O Keefe had held it back. The ball was shorter than what Jayant had thought. Unfortunately, he had already committed himself to the stroke, and had stretched full-length: all Wade has to do was to collect the ball and whip the bails off. He was never in a hurry.

It might have seemed ordinary bowling on paper. In reality, O Keefe had done precisely what they need to do on turners: he had treated it like an ordinary track and had bowled the perfect line and length, letting the pitch do the rest.

He had not got carried away. He had not tried to impart humongous turn. Instead, all he had done was to bowl four or five balls on a spot, tossing the odd one up and holding one back every now and then.

It was out-of-the-world bowling. It was intelligent, efficient bowling, the kind you expect from a 32-year-old hardened by over a decade of Australian domestic cricket, from a man New South Wales had once appointed captain. O Keefe knew precisely what was needed and did exactly that, nothing more, refusing to get carried away by his success.

It was the first time O Keefe took 4 wickets in a Test innings.

He almost had his fifth Jadeja three balls later. Reviews suggested that the ball had hit Jadeja on the forearm.

He did not have to wait. He had another go at Jadeja once Lyon was through. Jadeja did read the flight well, but there was not enough beef in the shot; he holed out to long-on. And in his next over, Umesh Yadav edged an ambitious slog.

O Keefe, the least heard-of among the Australian quartet, finished with 13.1-2-35-6. His spell after the change of ends read 4.1-1-5-6. As cricket statisticians rummaged through databases, checking for all possible records, the unassuming left-arm spinner led his side off the ground. 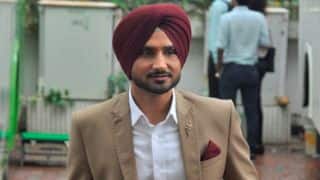 Harbhajan Singh: With MTV and 'Roadies', reach is more with youth 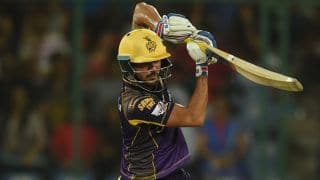