Steve Ogonji Tikolo, born on June 25, 1971, has been the torchbearer for Kenyan cricket for decades.

Steve Ogonji Tikolo, born on June 25, 1971, has been the torchbearer for Kenyan cricket for decades. He has epitomised cricket in the African country and at his peak, he was a good enough player to make it to the best of international sides. Tikolo s batting was a treat to the eyes and Suvajit Mustafi list out 11 interesting facts about the Kenyan cricket legend.

Tikolo comes from a cricketing family. An elder brother, Tom, captained Kenya, and he played alongside another elder brother, David, in the World Cup 1996.

Tikolo made his One-Day International (ODI) debut against India at Cuttack in the World Cup 1996. He was the saving grace for the Kenyan side. Batting at No 3, he scored a confident 65 from 83 balls. No other batsmen crossed the 30-mark as Kenya struggled to 199 in a match that India won by seven wickets.

3. Highest scorer in the win over West Indies

In one of the greatest cricket upsets of all-times, Kenya pulled off a win against West Indies at Pune in the World Cup 1996. Kenya scored 166 and West Indians were bowled out for 93. Tikolo was the highest scorer in the match with 29, in fact he had hit the solitary six of the match.

Tikolo scored 147 of Kenya s total of 241 in the ICC Trophy final against Bangladesh. Despite his heroics, Bangladesh pulled off a thrilling win via Duckworth Lewis method. Both Kenya and Bangladesh managed a World Cup 1999 berth. Tikolo played a huge role in his side s success. He was the second highest scorer in the tournament with 399 runs at an average of 44.33.

5. Stars with the ball in a win against India

In 1998 at Gwalior, Kenya pulled off an upset in the Tri-Nation Tournament against India. Tikolo managed only 21 with the bat, but with his wily off-spinners registered figures of 10-0-23-3. His scalps included India s top scorer Rahul Dravid, Robin Singh and Jatin Paranjape. Kenya registered their maiden win against India by 69 runs.

Marylebourne Cricket Club (MCC) side led by Matthew Maynard toured Kenya in 1999. In one of the games, Tikolo, representing the Kenya scored 137. So impressed was Maynard that he said that Tikolo would get into any international side in the world.

Kenyan cricket reached its pinnacle in the World Cup 2003. Under Tikolo s captaincy Kenya reached the semi-final of the World Cup. Kenya beat sides like Sri Lanka, Canada, Bangladesh and Zimbabwe to reach the semis, where they lost to India.

Tikolo revealed that 2011 World Cup would be his last international tournament and the match against Zimbabwe at Kolkata was supposed to be his last appearance. He was dismissed leg before in the match by Raymond Price but in a great gesture, none of the Zimbabweans celebrated. In fact, they crowded Tikolo and gave him a round of applause. They continued clapping in unison till Tikolo reached the dressing room and this touching tribute was one of the moments of that World Cup.

In 2012, Tikolo was appointed the batting coach of neighbouring nation Uganda. Since his relations with the Kenyan board soured over the years he took up this role.

Tikolo was recalled in the national side in 2013. He had to come out of his retirement for the World Twenty20 Qualifiers in the UAE more than two-and-a-half years after he last played for the country. Tikolo returned to play four Twenty20 Internationals (T20Is) and one ODI. 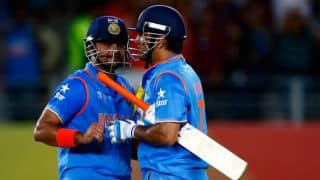 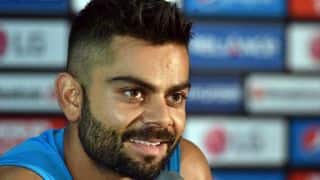