Steve Waugh, born on June 2, 1965, is one of the greatest batsmen to have played for Australia.

Stephen Rodger Waugh, born on June 2, 1965, is one of the greatest batsmen to have played for Australia. Waugh was known for his mental strength and gritthat personified the Aussie dominance in the late 1990s and the early 2000s. Nishad Pai Vaidya picks 12 facts one should know about Waugh.

1. Elder of the two twins

Steve Waugh was born about four minutes before Mark. As a result , Mark got the nickname Junior .

2. Playing cricket and football at a young age

The Waugh twins played cricket and football at a young age and managed to maintain a balance between the two. In Australia, you would find most sportsmen dabbling in different sports before choosing one as a career. The represented Sydney Croatia football team as youngsters before they shifted their focus to cricket.

4. One of two to be a part of Australia s first two World Cup triumphs

Steve Waugh was a youngster in 1987 when Allan Border s team went on to win the World Cup in India. Tom Moody, a young all-rounder from Western Australia, was also a part of the side. In 1999, Steve and Moody were the only two surviving members of the 1987 team that clinched the World Cup in England.

5. Dropped for the brother

In the 1990-91 Ashes Down Under,Steve was dropped from the Test team. The man who took his place in the side was his brother twin Mark! The younger Waugh celebrated the occasion by scoring a century on debut. However, later in 1991, Waugh returned to the Test team and remained a fixture ever since.

6. One of two Australians to be out handled the ball in international cricket

In 1979, Andrew Hilditch became the first Australian and the second man in Test cricket to be out handled the ball. Waugh entered the unwanted league when he deflected a ball away with his glove during the Chennai Test against India in 2001. In a reflex motion, he tried to steer the ball away with his gloves and the Indians appealed.

7. Playing for Ireland against Australia A

In 1998, a strong Australia A side featuring Matthew Hayden, Michael Hussey, Damien Martyn, Andrew Symonds, Brendon Julian, Adam Dale, Jason Gillespie and Andrew Bichel played a few games against Ireland. Interestingly, Waugh played for Ireland in that series against some of his own international teammates. Waugh played one First-Class match and five limited-overs games. He scored only one fifty.

Waugh was known for his grit and fight through his career. Be it standing up to Curtly Ambrose or fashioning that famous knock against South Africa in the 1999 World Cup, his remarkable character came to the fore. In the Ashes 2001, he was injured in the third Test even as Australia won. He missed the fourth Test but stayed on to play the fifth despite being advised months of rest. Waugh s wife asked him to stay on and lift the urn in England. He managed to get himself ready and smashed a ton in the fifth Test at The Oval. The picture of him diving to get his ton and raising his bat is one of the most iconic memories in recent times.

Waugh led the Australian team in its era of dominance and his record reflects that. He has the 1999 World Cup in his cabinet to show, but his 71.92 percent success rate in Test cricket as skipper is enviable. On that mark, he is ahead of Ricky Ponting, who won about 62 percent of his Tests as captain. Waugh captained Australia 57 times in Test cricket and won 41 of those encounters. To top it all, Australia had won 16 consecutive Tests during one of their successful runs.

10. Bowing out with the twin

Waugh is known for his charity and he credits meeting Mother Teresa for giving him the inspiration to do it. He has worked tirelessly for Udayan a residential centre for the rehabilitation of leprosy patients children in Kolkata. He has also started his own foundation called The Steve Waugh Foundation.

His son, Austin Waugh, is making a mark in international cricket. Like Steve, Austin, too, is an all-rounder. He played the 2018 Under 19 World Cup in New Zealand. Australia ended as runners-up, losing to a strong Indian side.

Glenn McGrath: I have no doubts that Mitchell Starc will be successful in Test cricket 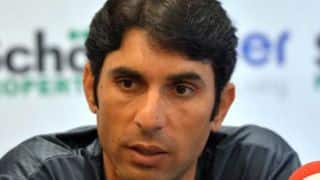 Misbah-ul-Haq's car seized due to non payment of taxes