Finn after a good start to his international Test career was tipped to be the next Steve Harmison.

Making his debut in 2009, Steven Finn was hailed to be the future of England cricket. But injuries along with issues related to his delivery stride and disturbing the stumps while delivering the ball hindered his career. Brought in as a replacement for Mark Wood in the third Ashes Test at Edgbaston, Finn has grabbed the golden opportunity and made it count in the first innings of the Test. Suraj Choudhari takes a closer look at the bowler who has shades of  Steve Harmison.

Finn had a good start to his international career and looked very promising. But his unique style of delivering the ball from close to the stumps took a heavy toll on him since 2012. To get rid of this unwanted habit of unsettling the non-strikers stumps, Finn spent a lot of time with Middlesex Manager and former England bowler Angus Fraser. They experimented with his action and trimmed his run-up too in order to eliminate his tendency to upset the stumps while delivering the ball but all in vain. But somehow he has defied all the odds and earned a comeback call to England’s Test side.

England’s major concern in the second Test was their bowling and probably one of the main reasons why they were handcuffed at Lord’s. Then comes a six foot seven inch tall Finn, charging in with a long stride at Edgbaston. Although Anderson stole the show with his best performance in the Ashes, it was Finn who inflicted the real damage. He ran in and was clocking a destructive speed on a consistent basis. Usually, a bowler who’s making a comeback after such a long time is bound to look a bit rusty but Finn looked achromatic.

One should remember that he got the key wicket of England’s tormentor-in-chief at Lord’s Steve Smith who scored a double-century at Lord’s. Smith came out to bat in a similar situation to that of Lord’s but failed to replicate the same performance. Then, Finn ripped through the defences of Australian skipper Michael Clarke with a yorker length delivery. He played with the Clarke’s mind and surprised him with a fuller length after setting him up with good length stuffs.

These succeeding wickets exposed Australia’s inexperienced middle-order and for someone like Anderson it was just a matter of time to get rid of them.

Finn’s tall height is his biggest advantage, which he can use to get that extra bit of bounce from any surface. Any bowler bowling at such a menacing pace with that extra bit of bounce is very lethal in any format. Mitchell Johnson has already shown how a bowler can use bounce to his advantage. England should invest more in a bowler of Finn’s calibre. The 26-year-old possesses immense talent and well capable of being productive across every format. As of now, Finn has justified his selection and the management should back him as he is capable of winning games single handedly. 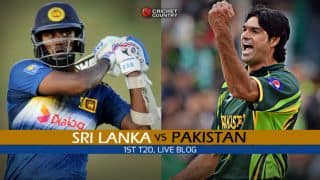