Smith was one of Australia s World Cup winning heroes of the 2015 campaign and became the nation s 45th Test captain.

Steven Peter Devereux Smith, born June 2, 1989, made his Test debut for Australia in 2010 as a leg-spinner but later established himself as one of the best batsmen in the world. Smith was one of Australia s World Cup-winning heroes of the 2015 campaign and became the nation s 45th Test captain. At 25, he also became the youngest to lead his country in Test cricket. Suvajit Mustafi lists out 14 interesting facts about the young Aussie sensation who marked an amazing transformation like a Marvel Comics superhero.

1. Made headlines as bowler

Smith is one of the best batsmen in the word, but initially he made his name as a bowler. He was mentored by the legendary Shane Warne and was New South Wales leading wicket-taker in the KFC T20 2007-08 competition. He made his Test debut in July 2010 against Pakistan as a leg-spinner.

2. Loves tennis and is a Roger Federer fan

Smith is a sports-loving character. When he isn t playing or watching cricket, he spends time watching some sport; tennis is his favourite and the legendary Roger Federer is his hero. Smith is a regular at Australian Open, and his girlfriend Danielle Willis got themselves photographed along with Federer and Australian tennis star Lleyton Hewitt in 2015.

It was an absolute honour to meet my favourite athlete of all time tonight. Thanks @rogerfederer and best of luck in the Australian open.

Smith is a huge horse-racing fan and co-owns four racehorses. He co-owns three of them with leading horse trainer Chris Waller.

4. Butt of jokes to a superstar

Smith s story has panned out like the Marvel superhero Peter Parker. When he arrived on the scene, there were talks of him being the next Shane Warne. He was leg-spinner who made his Test debut despite of a bowling average of 72. He was a talented cricketer who could do a little bit of of all. He did not the template of the Australian cricket star. He was shy, and by his own admission, his role in the side was to raise team spirits by telling jokes to players. Like Ravindra Jadeja, the baby-faced Smith too was a butt of jokes on social media.

In January 2011, Michael Clarke made a plea on social media on behalf of Smith on Twitter: Trying to find a date for Steve Smith to take to the AB medal? You can tweet me with your expressions of interest.

In a remarkable turnaround, Smith now has a beautiful girlfriend, a glittering cricket career, lucrative T20 league contracts, is tipped to be the next Australian skipper and is the country s World Cup-winning hero.

Since 2011 Smith has been dating Danielle (Dani) Willis, a law student from Macquire University. According to his teammates, Smith tries and learns legal terms online. In a Sydney Morning Herald report, Smith was quoted as saying, I try to occasionally learn some law lingo. A few words here and there, which is always interesting. Most of it goes over my head. I’m not quite smart enough for that. But I try my best.

Dani said, I try and educate him and Steve tries to educate me on his art. Perhaps she takes his art too seriously…

6. …and she helps him practice harder

Your life is set if your partner takes keen interest in your passion and profession. Smith is definitely lucky on that front. Dani is an intelligent young Sydney woman immersed in thick books and is dating a man who could not finish school. In a report from The Australian, Smith said, She s a bit too smart for me, I think. In reality, Dani helps Smith practice harder and many a times is seen feeding balls into the bowling machine at the Sydney Cricket Ground. Smith has acknowledged her role in his developing as a cricketer in multiple interviews.

8. Been part of five IPL sides

Smith was first bought by Royal Challengers Bangalore in 2010, the following year he was picked by Kochi Tuskers Kerala, who were dropped from IPL the following year. Smith s impressive show in BBL 2011-12 caught the eye of Pune Warriors India skipper Sourav Ganguly, as the franchise bagged him in 2012 auction. In 2014 he was picked by Rajasthan Royals, who appointed him as the side s captain om 2015. Once the Royals were suspended for two years he played for Rising Pune Supergiants in 2016 and replaced MS Dhoni as their skipper in 2017. Smith led them to the final in 2017 where the side lost by a run. He top-scored in the game with a fifty.

Smith and Hughes played a lot of cricket together. They went to England together before they came of age, and became close friends. Hughes tragic death after being struck on the head in November 2014 shocked the cricketing world; it was also a difficult time for his buddy Smith. In an interview with The Australian, Smith confessed, Me and Phil were pretty close. It was a tough, tough period that. In a wonderful tribute to his little friend , Smith in the Adelaide Test, walked to the 408 (Hughes Baggy Green number) painted on the grass and pointing his bat skyward. In what was a difficult emotional time, Smith scored a steely unbeaten 162, contributing in the side s win.

Australians like to party. They are also typically portrayed as loud-mouthed larger-than-life characters. They love to play hard and celebrate triumphs with well-deserved drinks. Smith, on the other hand, doesn t like to drink much. However, the chubby young boy has turned leaner and fitter with age.

There are a lot of carbs in beer. When I’ve been doing the diet, I’ve had my alcohol consumption pretty low. I’m not a huge drinker, Smith was quoted by Sydney Morning Herald.

11. When captain Smith asked the veteran Stuart MacGill to f**k off

Smith might have started as a shy guy, rarely joking with seniors, but the he takes his leadership role very seriously. During a match as captain of Sydney Sixers in the first season of BBL, Stuart MacGill had protested when Smith asked him to field at fine-leg. MacGill said he was sore, and was in the side to bowl. That didn t go well with the young skipper, who shot back, Look mate, I am the captain, you do what I say. Now f**k off and get down there.

Smith has made his priorities clear. Speaking of this incident, he said, I’m not afraid to do that. It comes with the job, and everyone understands that. I think he was a little surprised at first. But then he went to the position I had said.

Smith had eventful stints in 2016 and 2017. While he continued to score a lot of runs, Australia were whitewashed 3-0 in Sri Lanka. It did not end there. They were whitewashed in ODIs in South Africa. Worse, a South Africa sans AB de Villiers and Dale Steyn beat Australia 2-1 in Tests Down Under. The India tour came after they found momentum after beating Pakistan. Australia won the first Test but India bounced back to seal series 2-1. But the series was more about the Smith and Virat Kohli controversy.

In what he called a brainfade moment, Smith sought intervention from dressing-room whether or not to go for the DRS. He was criticised and Kohli accused Australians of cheating. It all snowballed into a controversy that lasted throughout the series. However, this did not effect Smith’s batting. He was the highest run-getter in the series, with 499 runs.

Smith is by far the best batsman in Test cricket. He has dominated the ICC Test Rankings for a while now. He has 6,199 runs at over 61 in this format. He led Australia to The Ashes win in 2017-18 season.

Smith lost his Australia captaincy and earned a yearlong ban from Cricket Australia after his involvement in the ball-tampering saga in Cape Town in early 2018. Cameron Bancroft was seen tampering the ball on the Day Three of the Test. Smith later confessed that the leadership team, which included him and David Warner knew about the tampering. Smith also received a two-year captaincy ban from Cricket Australia. He was also banned from participating in IPL 2018, where he was supposed to lead Rajasthan Royals (RR). 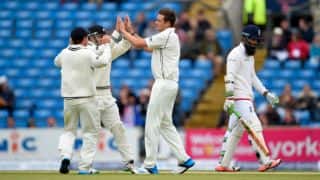