Steven Smith and Mitchell Marsh ground England to the WACA dirt on Day Three of the third Ashes Test. The home crowd, including his father Geoff, gave a standing ovation to Mitchell for walloping his maiden hundred. Before that they had to perform a mandatory acknowledgement for Smith’s double-hundred, his first as captain and second overall all against England.

Australia lost a solitary wicket of Shaun Marsh. That narrows down the kind of day the Englishmen had at Perth. It was also a day that surfaced Smith’s plethora of records that he has been piling since 2014: he collected 1,000 runs in a calendar year for the fourth successive time, leaving behind Brian Lara and Kevin Pietersen. He will equal Matthew Hayden if he continues his run-plundering hobby in 2018.

This was Smith’s 22nd Test. Playing as a leg-spinner, Smith made his debut back in 2010. He used to then bat at No. 8, gradually promoting himself up the order with his ever-improving batting skills. However, 20 of those 22 hundreds came to the fore since 2014, that is in a span of 4 years, that makes 5 hundreds a year at an average. While we observed his peculiar technique, Smith has been collecting records.

And today was just another day for him. He woke up, got ready, took the team bus, padded up, and broke a record like it is a part of his routine. He did not do it alone. In fact Mitchell, on his comeback, was lucky that he had Smith at the other end. The confidence, temperament, concentration, and all the ingredients that constitute Smith infected Marsh, and the Western Australian is a mere 19 runs from converting his maiden three-figure mark into a double-hundred.

29 runs of Mitchell’s 181 came down the ground and 75 through covers, and this is evidence to Mitchell’s approach. Although the track was a belter, Mitchell played with a straight bat and and immensely powerful forearms. Those straight-drives were a photographer s delight. The mid-off and mid-on were mere spectators, and the umpire had to often dodge to save himself from Mitchell s might.

Smith stated that he wants Marsh to reach 200 on Sunday morning, meaning Australia will not declare anytime soon. Both have already added 301 in 77.2 overs, burying England under a pile of runs. 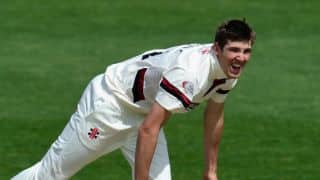