Smith looks in no mood to relinquish both, his role as the team’s best batsmen and the captain.

At the age of 25, Steven Smith has reached the pinnacle of his career and looks all set to be right up there among the greats in a matter of few years. Everything he’s achieved in this season is a testament of his excellent temperament, skill and hard work. Pramod Ananth feels that the best is yet to come.

Steve Smith played a captain’s knock for his Indian Premier League (IPL) franchise Rajasthan Royals (RR) against a demoralised Mumbai Indians (MI) team to set up a seven-wicket win, and more importantly, leading his team to their third consecutive win in IPL 2015.

Smith, leading the team in absence of injured skipper Shane Watson, looks in no mood to relinquish both, his role as the team’s best batsmen and the captain. He might not remain captain when Watson returns, but is certainly the leader when it comes to winning games for his side with the bat. Smith is already the leading run-getter in the tournament, and going by the rich form he has had in the past couple of months, it will not be surprising if Smith finishes as the leading run-scorer in IPL 8. IPL 2015: Points Table and Team Standings

Smith started off his international career as a leg spin bowler, who could bat coming low down the batting order. But a series of good performances got him promoted higher up the order and he did not disappoint. He has broken so many records this season alone, that it has become difficult to keep track. Four centuries against India in back home in the Test series in 2014-15, including one on captaincy debut. Not to forget the century he scored against England on One-Day International (ODI) captaincy as well. IPL 2015: Schedule with venue details

It was somewhat of a surprise when Smith was named captain of the Australian Test side  following an injury to Michael Clarke. Brad Haddin seemed like the obvious choice, considering he was the vice-captain, but the selectors put their foot down and picked Smith as the leader, which proved out to be the right decision.

With Clarke having retired in from One-Day Internationals (ODIs) after leading his side to victory in the ICC Cricket World Cup 2015, Australia must now choose a new leader. George Bailey has been leading the team in ODIs in Clarke’s absence, but Smith might just get the nod on a permanent basis this time. His performances and numbers will certainly justify the decision.

Smith has time and again proved that he is a sensible player. When RR took on Kolkata Knight Riders (KKR) in IPL 2014, the match went into super over. Rajasthan Royals needed three from the last delivery, but needed just two to win the game. With Sunil Narine bowling well, Smith decided to charge down and just push the ball in the vacant cover area and scampered for a couple of runs, which secured a win for his team.

Smith averages well over 50 in Tests and 40 in ODIs. His rise in the Australian hierarchy is not that surprising as he has backed his talent up with good performances time and again. But Smith is still very much in the beginning of what seems to be a long and prosperous career. One gets the feeling that this is just the beginning of something big. 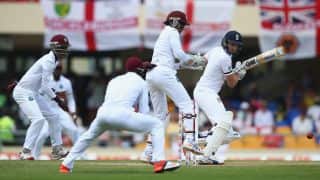