Striking similarities between India's World Cup triumphs in 1983 and 2011

Striking similarities between India's World Cup triumphs in 1983 and 2011

Sachin Tendulkar, the oldest member of the 2011 World Cup-winning Indian team, was a nine year old child when Kapil Dev s men stunned the cricketing world by winning the 1983 World Cup against all expectations and odds. 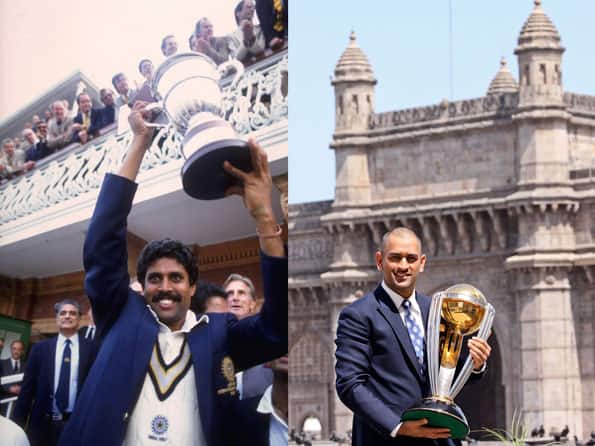 Sachin Tendulkar, the oldest member of the 2011 World Cup-winning Indian team, was a nine year old child when Kapil Dev’s men stunned the cricketing world by winning the 1983 World Cup against all expectations and odds.

Virender Sehwag and Zaheer Khan were both five year olds while the likes of Virat Kohli, Piyush Chawla, Suresh Raina, Ravichandran Ashwin were born three to five years after that epic victory at Lord’s. The rest of the 2011 champion team were between a few weeks old to three years. In brief, except for Tendulkar, it’s highly unlikely anybody in MS Dhoni’s champion 2011 team would remember India’s 1983 World Cup triumph – a moment that remains one of the greatest moments in Indian sports – not just cricket.

Though 28 years and a generation apart divide the two epochal triumphs, there are intriguing similarities between the two victories.

The 1983 team as well as the 2011 side that won the World Cup for India were led by two of the most brilliantly natural and unorthodoxly destructive men in cricket history. They did not hail from the big nurseries of Indian cricket like Mumbai, Delhi or Bangalore; Kapil came from Chandigarh and Mahendra Singh Dhoni from unpretentious Jharkhand.

Both Kapil and Dhoni were the kind of players who could destroy the best of bowling when they were in the zone. And both men played blazing knocks that was to stand out as defining moments of batting genius in the 1983 and 2011 World Cups. India would are almost certain of getting knocked-out of the 1983 World Cup when they lost half their side – Sunil Gavaskar, Krishnamachari Srikkanth, Mohinder Amarnath, Sandeep Patil and Yashpal Sharma – with just 17 on the board! Despite a 60-run stand between Kapil and Roger Binny for the sixth wicket, the loss of Binny with the score at 77 and Ravi Shastri at 78 meant India were almost out of the tournament. That’s when Kapil shifted gears and played what is still regarded as one of the greatest-ever knocks in One-Day International history – an innings of 175 not out which helped India reach a total of 226 for eight in 60 overs and change the course of championship and India’s cricketing future – something India’s present coach Duncan Fletcher will agree after being at the receiving end of that magnum opus by Kapil.

Like the match against Zimbabwe in 1983, the 2011 World Cup final looked a lost cause for India when they allowed Sri Lanka to blaze away and pile up a score of 274 and India, in reply, losing their two key players in openers Sachin Tendulkar and Virender Sehwag with just 31 on the board.

Though Gautam Gambhir and Virat Kohli added 85 runs for the third wicket, the target still looked very steep when India lost a third wicket – Kohli – at 114. That’s when Dhoni shocked one and all by promoting himself ahead of the in-form Yuvraj Singh.

Both Kapil and Dhoni are masters in combating pressures. In the 1983 World Cup, Kapil’s innings of 175 not out came amid a string of low scores. He did not cross fifty in even one of the other seven innings he played in the 1983 World Cup, in which he scored just 128 runs! In seven innings in the 2011 World Cup prior to the final, Dhoni had scored just 150 runs – a clear indication of the wretched form he was in. But like Kapil he rose to the occasion and scored an unbeaten 91 off 79 balls that turned a near-certain defeat into an epic World Cup triumph.

The 1983 World Cup and the 2011 World found two unlikely men as India’s bowling heroes of the championships – Mohinder Amaranth in 1983 and Yuvraj Singh in 2011.

Amarnath was one of the most ridiculed players of his era for the number of times he was pole-axed by bouncers, but the 1983 World Cup was his pinnacle of glory under a captain who believed in him.

Amarnath won back-to back Man-of-the Match (MoM) awards in the 1983 World Cup semi-final and final, while Yuvraj won a record four (MoM) awards in the 2011 World Cup. And both Amarnath and Yuvraj, to the eternal credit of their respective captains, were also named “Player of the World Cup” in 1983 and 2011 respectively.

India were rank outsiders going into the 1983 World Cup. In 2011, India came into the championship as strong favourites. On the face of it, nothing may seem common to two of the greatest teams in Indian cricket history. Yet, if one scratches the surface, there are many commonalities between the two historic teams.

India came close to being ousted in the 1983 World Cup. India’s initial passage did not give much confidence among the followers that the team would make much progress.

Firstly, the two captains – Kapil Dev and Mahendra Singh Dhoni. Both generals commanded awe and respect, not just from the fans but also from their own team mates. You cannot hope to see two more fearless individuals than Kapil and Dhoni. Both men brought multiple skills to the table and both unleashed their talent in the most fearsome manner that could change the game in an instant. As leaders, they were extremely inspirational and led from the front. Their methods may not subscribe to the conventional methodology propounded by the purists, but nobody could dare point a finger at the efficacy of their approach. It frustrated bowlers, tested captains but brought unlimited joy – if you were an Indian supporter.

Both men had enormous appetite for taking risks, be it in their batting or in taking decisions as captains. And they cared two hoots for criticism – such was their self-belief.

In leading their victorious side, both men knew that they were not necessarily the most glamorous member of the side. Both men had to concede that honour to men who had earlier led the country. Kapil was just four years into international cricket when leading the 1983 side. That team had a former captain and a legendary player in its ranks in Sunil Gavaskar, who was playing international cricket for 12 long years. If Kapil had to lead Gavaskar, Dhoni had to lead the living legend in Sachin Tendulkar.

Two openers & former captains, both from Mumbai and both legends

In 2011, the role of Srikkanth was played by Tendulkar’s opening partner, Virender Sehwag. Gavaskar and Tendulkar enjoyed the best ringside seats – at the non-striking end – to feast on the legalised mayhem of Srikkanth and Sehwag.

In 1983, the No 3 position was occupied by a Delhi stalwart in Mohinder Amarnath, who brought a sense of calm after the opening wicket storm. In 2011, it was another Delhi man in Gautam Gambhir who occupied the pivotal No 3 slot. Amarnath did not play any big innings in India’s victorious campaign, but he played many cameos – similar to what Gambhir did in 2011.

If Gordon Greenidge provided the destructive threat to India in the 1983 World Cup, it was Tillakaratne doing the same in the 2011 World Cup. But both men did not prosper, in the respective finals, thanks to the Sardars in the team – Balwinder Sandhu in 1983 and Harbhajan Singh in 2011 – who bowled the dangermen.

The opposition captain in both teams were world class batsmen – Clive Lloyd for the West Indies and Kumar Sangakkara for Sri Lanka.

When India were bowled out for 183, in the 1983 final, it looked as if West Indies would win their third straight World Cup with a strong battling line-up that had the likes of Greenidge, Desmond Haynes, Viv Richards, Lloyd, Larry Gomes etc. When the second innings of the 2011 final began, Sri Lanka were the overwhelming favourites to win the World Cup. Yet India pulled off the Houdini act in both finals!

There was one Indian who had a major role in both World Cup triumphs – Krishnamachari Srikkanth. In the 1983 final, his 38 – believe it or not – was the highest score of the final! In 2011, Srikkanth was the chairman that picked the winning team.

Finally, a tit-bit that may bring cheer to ornithologists: A ‘bird’ (Dickie Bird) umpired the 1983 final, while a crow (Jeff Crowe) was the match referee in the 2011 final!