Binny's fluent knock against Derbyshire puts him good stead for being picked for the 1st Test.

Stuart Binny struck an unbeaten 81 off 111 deliveries in India’s tour match against Derbyshire on July 2, 2014. With India’s final XI seemingly not clear for the first Test against England at Trent Bridge, this knock probably has caused a selection headache. With him being the only genuine swing-seam bowling all-rounder, there could be a late call for his selection in the Indian team. Shrikant Shankar ponders whether Binny actually should get his India Test debut at Nottingham.

There are only a few days left before India play the first Test against England at Trent Bridge. One practice match is over against Leicestershire and the second is being played against Derbyshire. Even if MS Dhoni and the Indian selectors have a fair idea of who would play in the first Test, observers, media and fans can only guess. There is no certain XI that comes to mind that is best fit to play in Nottingham. While the first tour match against Leicestershire didn’t excite fans from a bowling perspective, many Indian batsmen got amongst the runs.

The second tour match against Derbyshire was striking a similar cord with regards to bowling. The Indians let the opposition score 326 runs and took only five wickets on the first day. Day Two started with both openers Shikhar Dhawan and Murali Vijay getting out for six each. Cheteshwar Pujara scored an impressive 81 off 131 deliveries. He struck 13 fours before retiring out. Virat Kohli (36), Dhoni (46) and Ravindra Jadeja (45) all got going. The latter two scored quickly as well.

But it was the batsman at No 7 who made the biggest impression on the day. Stuart Binny surely would have walked out to bat thinking he would not play the first Test. If that thought helped him relax and play freely, then it paid off. The right-handed batsman started slowly by concentrating on the singles. He let some bowlers a few maidens to him as well. Once Binny got his eye in, he became a different batsman. He played more positively and found the boundaries more often.

In the last session, Binny was finding the fence at will. He shared an 88-run partnership with Jadeja for the sixth wicket. He then added an unbroken 53-run stand with Ajinkya Rahane. In the end, Binny remained unbeaten on 81 off 111 deliveries. He hammered nine fours and two sixes in his innings, which had a strike-rate of 72.97. India declared at 341 for six as stumps on Day Two were called for. This is the type of lower-order batting every successful side needs in a Test match. He has certainly created a selection headache ahead of the first Test against England.

Now Binny is nowhere near the finished article, but he is the only genuine seam/swing bowling all-rounder India have for this long Test series. Conditions in England are known to favour his ilk of bowlers. Playing two spinners could be futile on most grounds, except The Oval. England themselves will probably select only Moeen Ali in the spin department. Ali is a proper batsman and can bowl a bit, but not a genuine spinner.

Jadeja and Ravichandran Ashwin are India’s main spinners. While Jadeja’s all-round capabilities help his selection, Ashwin’s record in away Tests may go against him. If the Indian selectors decide to go in with one spinner and three seam/swing bowlers, then Binny may prove to bet a good option. With his batting skills to go with his bowling, Binny could actually make his debut for India in Tests in Nottingham. 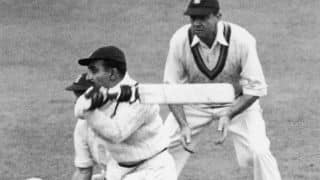