Mohit Sharma, Stuart Binny became the fourth pair to take all 10 wickets in an ODI innings.

With Stuart Binny scything through the Bangladesh line-up and trample one record after another in the way, Mohit Sharma’s contribution went overlooked. Abhishek Mukherjee looks at a record that went almost unnoticed amidst the entire hullabaloo.

Mohit Sharma had started the rout; then wickets kept falling to Stuart Binny; and Bangladesh, chasing 106, were bowled out for 58. Records tumbled like ninepins, most of them to Binny, but between the two, Mohit (8-2-22-4) and Binny (4.4-2-4-6) another record was made: they became only the fourth pair to bowl out a side in an ODI innings. Interestingly, all four instances involve world records that still stand [the most recent one, of course, being Binny’s 6 for 4 — the cheapest six-wicket haul in history].

The first instance had come in a Prudential Trophy encounter of 1977, when Greg Chappell (5 for 20) and Gary Cosier (5 for 18) bowled out England for 171 at Edgbaston. It remains the only instance where two bowlers took five-wicket hauls in the same ODI innings. Australia then crashed to 70 against John Lever.

The second, of course, was at SSC in 2001-02. Bowling unchanged, Chaminda Vaas finished with 8 for 19 including a hat-trick that involved Stuart Carlisle, Trevor Gripper, and Tatenda Taibu, the best bowling figures in ODI history till date. Things were going well with Nuwan Zoysa cooperating by not taking a wicket from the other end, but Sanath Jayasuriya played spoilsport by replacing Zoysa with Muttiah Muralitharan in the 16th over.

The inevitable followed: Murali polished off the remaining 2 wickets in 4 balls, and Vaas never got his ten-wicket haul. Zimbabwe were skittled for 38 (then the lowest ODI score), a target Sri Lanka chased down in 4.2 overs (then the fastest ODI victory).

When you score an 86-ball 112 not out, you’re not expected to do a lot more for your side, especially if they reach 391 for 4, but Paul Collingwood had decided otherwise that day at Trent Bridge. Chris Tremlett started it all, by removing Shahriar Nafees and Tushar Imran off successive deliveries; the next ball hit Mohammad Ashraful’s wicket but did not dislodge a bail.

Thus reprieved, Ashraful put up a savage display of batting, scoring an outrageous 52-ball 94 as Bangladesh crashed to 223. While Tremlett finished with 4 for 32, Collingwood stole the show with 6 for 31 at the other end: it remains the only instance when a cricketer had scored a hundred and had taken 6 wickets in the same match. 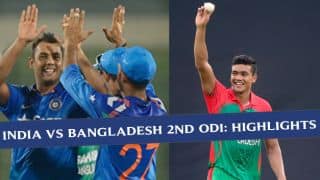