In 2007, a 21-year-old tall blonde pacer from England called Stuart Broad was taking his nascent steps in international cricket. Getting a bit carried away, he sledged Sourav Ganguly during an ODI match between India and England at The Oval and hurt the southpaw’s ego, who soon hammered him for six. Twenty20 cricket had not taken the world by a storm yet and therefore an angry young fast bowler getting hit for a straight six was embarrassing indeed, and Broad was dearly trolled. It was only a short trailer; just a few weeks later, Broad became a part of history when another Indian left-hander, Yuvraj Singh pummelled him to every corner of Kingsmead to register six sixes in an over. ALSO READ:Alastair Cook hails Stuart Broad for series victory over South Africa

Garry Sobers and Ravi Shastri had done the same in First-Class cricket, and a few months prior to the onslaught, Herschelle Gibbs in ODIs. The ones at receiving end were all spinners, but here a young England fast bowler at the big stage of the inaugural ICC World T20 was the subject of humiliation. Little did one know that in times to come he would go on to rule the charts as Test cricket’s best bowler. Last week, Broad demolished the South African batters at Johannesburg, guiding England to a series win and by the time the Test concluded, Broad had displaced Ravichandran Ashwin as the No. 1 Test bowler in ICC Rankings.

Was he this good?

Ask him now; he will still say he is not the best. In fact, he does not even agree that he is the best bowler in England, let alone the world. Broad became only the second English bowler since Ian Botham in 1981 to top the official ICC Rankings (the other being Steve Harmison in 2004), but he believes Dale Steyn is the best bowler of this generation, and James Anderson the best England have ever produced. He may be right, but the very names coming in the same line as Broad’s speaks volumes of this his potential. ALSO READ: Stuart Broad goes past Bob Willis to become England’s third-highest Test wicket-taker

It is safe to say that he was the second in command to James Anderson for years. Fast bowlers usually hunt in packs or pairs. There were Jack Gregory and Ted McDonald, Ray Lindwall and Keith Miller, Fred Trueman and Brian Statham, Wes Hall and Charlie Griffith, Neil Adcock and Peter Heine; there was the quartet of Andy Roberts, Michael Holding, Joel Garner and Colin Croft, and Malcolm Marshall later; there were Dennis Lillee and Jeff Thomson, Wasim Akram and Waqar Younis, Curtly Ambrose and Courtney Walsh, and more. Apart from Anderson and Broad, a good recent example can be of New Zealand’s Tim Southee and Trent Boult.

In the first four years of Test cricket, Broad played a good supporting role to his senior partner but his record was far from impressive. Till June 2011, Broad had 107 wickets from 37 Tests at 36.25 at a strike rate over 69. Then the Indians arrived. The tour marked a new chapter in Broad’s career. He finished with 25 wickets from 4 Tests at 13.84. This time Anderson played the support role and had to remain content with 21 claims. In the second Test at his home ground in Trent Bridge, when India looked to dominate, Broad’s almost a run-a-ball 64 lifted England up. Just when it seemed his old nemesis Yuvraj was bailing India to shores, Broad struck timely. He troubled Yuvraj with bounce and seam movement, and a review went the latter’s way too. Finally, he did manage to induce the batsman to edging one to the wicketkeeper. Yuvraj knew that he was not facing the same bowler whose confidence he had shattered four years back.

England won the series 4-0. Broad was the Man of the Series and England snatched the ICC No. 1 Test team’s mace from India. Since the start of that series till now, Broad has picked 223 wickets at 24.85. As a matter of fact, no bowler has picked up more Test wickets than him during this period. Herath comes close second (213 at 27.01) followed by Anderson (210 at 27.15).

Emerging out of Anderson’s shadows

Even during this golden phase, not all was good for Broad. Termed the ‘next big thing of England cricket’, Broad was elevated to the T20I captaincy, only to be stripped off it later. Post a poor ICC Cricket World Cup 2015 campaign he was dropped from the side. One cannot help but agree, for his rise with the red ball has been in times when he has not played enough with the white ball; on the other hand, he is only 29, and is eager to play in every format. ALSO READ: Stuart Broad believes Dale Steyn is “bowler of the generation”

2012 was not a great one for Broad. He did not create an impact in India, and struggled with his heel injury. The drop in pace was a concern and critics gleefully readied their pens to write him off. However, off-form is a part of every long career; Broad bounced back on the New Zealand tour in March 2013. He continued to impress and when England were thrashed 0-5 in the Ashes 2013-14 Down Under, Broad was still their saving grace. In a disaster of a series, Broad emerged out England’s best player with 21 wickets at 27.52.

Broad has learned a lot from Anderson over the years and they have formed quite a partnership with the new red cherry. He does credit his partner for a lot of his success. A recent report from The Guardian quotes Broad describing the partnership: “We really are a partnership and we talk about it all the time. We’re very fortunate to have played the amount of cricket we have together. There have been times when we could have been cast aside by selectors without doubt, but we’ve been given opportunities to succeed and we’ve done that nicely.

We suit each other’s style of bowling. We can be grumpy with each other, we can congratulate each other but we’re always even, there is never a battle between us to get wickets.

People talk about cricket being an individual game but I really don’t agree; everything is done in a partnership. When Joe Root and Ben Stokes bat together, Stokes gets a bad ball because Root has seen off three good ones. Jimmy and I are the same. Generally the guy at the other end not getting the wickets is the one building the pressure and maybe even bowling better.” ALSO READ: Why England, not India, should have been No. 1 Test cricket team

Despite both being right-armers, they are different bowlers. While Anderson relies on swing, Broad is more of a hit-the-deck bowler and relies more on pace, bounce and seam movement off the surface. But both are good in terms of playing with batsmen’s mind around the corridor of uncertainty.

Though Broad refers no competition with his senior partner, Anderson is looked upon as the more potent threat with Broad playing a support role. Over years Broad has successfully emerged out of Anderson’s shadows to establish himself as one of world cricket’s premier bowler. Anderson’s forte is consistency, while Broad has the ability to run through sides in a session. The 8 for 15 at Trent Bridge in Ashes 2015 decided the Test in its first session; now, the 6 for 17 at Johannesburg sealed the Test, which seemed to head towards a thrilling conclusion, to a one-sided English win.

It is to be noted that the Trent Bridge effort came in absence of Anderson. Anderson had picked up a six-for in the earlier Test and England were worried that the mistimed injury would hamper the side’s progress. Broad only ensured an easier win.

Broad has not been simply picking wickets, but he has been dismissing the top batsmen. The fact that he has dismissed Michael Clarke 11 times, Ross Taylor and AB de Villiers 9 times each and Steven Smith 6 times proves the aforementioned. Even Sachin Tendulkar and Ricky Ponting have found things difficult against him.

Since Broad’s renaissance period in 2011, no bowler has been as impactful as him. In matches England have won, he has claimed 119 wickets at 17.02. The only person who has picked more wickets at a better average than him during that period is Steyn, who has 120 wickets at 16. During this time, he also has pocketed 7 Man of the Match awards, more than what Anderson has received. ALSO READ: South Africa vs England 2015-16: Dale Steyn ruled out of final Test

Leader of the pack

Anderson is 33, and has not been the fittest off late. There are only a handful of years left for him. With Broad being only 29, he looks set to take the charge of the ‘leader of the pack’ mantle. England do have good talent in form of Steven Finn, Mark Wood, Chris Woakes and others, and Broad looks set to lead an attack comprising of them.

He is young, sharp, can bat as well and in times to come he will play a key role for England in limited-overs cricket too. The prophecy in mid-2000s of him being the ‘next big thing of England cricket’ seems to be coming true. 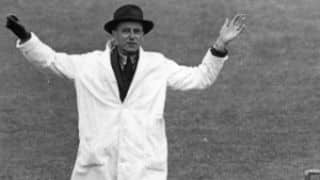