Born September 28, 1975, Stuart Rupert Clark is a former fast-medium bowler from Australia, who was described “a similar style bowler to Glenn McGrath” by the selectors

Born September 28, 1975, Stuart Rupert Clark is a former fast-medium bowler from Australia, who was described “a similar style bowler to Glenn McGrath” by the selectors. A successful bowler, he played for Australia in all three formats (Tests, ODIs and T20Is) in between 2006 and 2009. Abhishek Kumar looks at 14 interesting facts about the successful bowler.

Clark was born to Bruce and Mary. Father Bruce was an Englishman and was born and brought up in India before the country’s Independence. He met his wife Mary in Chennai. Both Bruce and Mary went to Australia in early 70s. Their son, Stuart was born in Sydney and became the first Indian origin male cricketer to represent Australia.

Besides cricket, Clark holds a Masters in Commerce, which he completed in 2009 during his playing days. Further, he also completed his degree in law at the University of Sydney. Prior to all these, Clark has also worked as real estate agent.

Clark was given the nickname ‘Sarfraz’. Former Australian cricketer Mark Waugh gave the nickname to him. Why? A young Clark’s bowling style resembled to the former Pakistani bowler Sarfraz Nawaz. Clark didn’t like it and objected too, but once he got this nickname, it just got stuck.

Clark was initially called to represent Australia in Tests for the fourth and fifth match in the Ashes 2005, but had to wait for his Baggy Green. Finally he got it in March 2006 in South Africa. He took a fifer in his first innings and ended a bowling figure of nine for 89 in the match. He continued to impress in the series and took 20 wickets. He was awarded the Player of the series as Australia comfortably won the series.

Like his debut Test series, Clark performed in the same manner in his first Ashes series of 2006-07. He was the highest wicket taker in the series with 26 scalps. He was the Man of the match in the final Test.

During the Ashes 2010, when Merv Hughes was giving the caps to players, he gave a very special advice to Clark and said, “There is an emu and kangaroo on the front of your hat, they never take a step backwards and I know you won’t, either.”

Clark quit from international cricket and State cricket on May 18, 2011 and took the role General Manager of Sydney Sixers and was also part time player for the team. He stepped down from that post in November 2012.

There are few things which are very rarely known about Clark and one of those things is that he used to work part-time at a bank during his playing days.

In an interview in ESPNcricinfo in 2009, Clark recalled his most embarrassing moment and said, “In the Brisbane Test against New Zealand in 2008, I was running for two but I slipped and fell. As I got up I slipped again. I ran down the non-striker’s end and dived into the crease. Then I realised the fielder had yet to pick the ball.”

Clark was never the part of Australian side during Steve Waugh’s playing days but he used to get the latter’s wicket most of the times in the nets.

During a domestic game in Australia, Clark bowled a bouncer and the umpire called it as a wide. He went up to the umpire and asked, “Are you kidding?” A moment later both started laughing at each other after the umpire asked him get back to his position.

For Clark, Darren Lehman was the best character as he was the guy who had a lot of fun.

Clark is a fan of Tiger Woods, Michael Jordan and Roger Federer.

In the Ashes 2006-07, Shane Warne took his 700th Test wicket, when he dismissed Andrew Strauss. Clark has described that as his favourite cricketing moment. 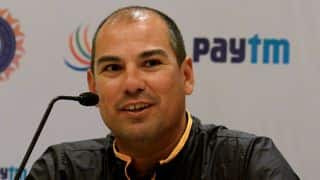