Subrata Guha was a 20-year old seamer. Chuni Goswami, an ace footballer. Together, they stunned Garry Sobers and his men.

In an era when West and South Zones dominated Indian cricket with North Zone carving a niche of their own, BCCI decided to combine Central and East Zones for tour matches. In one of these matches at Indore, Hanumant Singh s team shocked a rampant West Indian side. Abhishek Mukherjee looks back at December 28, 1966, when Subrata Guha and Chuni Goswami pulled off a remarkable upset.

While Mumbai were on a rampage in the 1960s (indeed, they won the Ranji Trophy from 1958-59 to 1972-73), Rajasthan played the ubiquitous bridesmaid, coming runners-up in 7 of the 15 editions. Bengal did it thrice more, while Maharashtra and three South Zone teams shared the other 5 finalists spots.

Despite that, Central and East Zones combined to form a single team in 1966-67, as they had done when Mike Smith s England toured India in 1964-65. This time, against Garry Sobers West Indies, BCCI decided to combine the teams yet again.

The tourists started with a rain-affected draw against Indian Universities, a side that boasted Bishan Bedi, Ashok Mankad, and Michael Dalvi. There was also a 20-year old called Subrata Guha who could swing the ball both ways. West Indies lost only 10 wickets in the match, of which Guha claimed 5 for 80.

Trailing by 59, West Zone were in tatters at 82 for 5. Conrad Hunte, deputising for Sobers, decided to rest Wes Hall and tried eight bowlers. They needed a mere 192 in the first Test at Brabourne Stadium, but were reduced to 90 for 4 by Bhagwat Chandrasekhar, who was given new ball. It did not matter: Sobers and debutant Clive Lloyd took 68 minutes to go 1-0 up.

The next match was against Central and East Zones almost an afterthought en route to the second Test at Eden Gardens.

To be fair, the hosts fielded a strong line-up. Led by Hanumant Singh, one of the architects of Rajasthan cricket in the 1960s, the side included Ramesh Saxena, Parthasarathy Sharma, Daljit Singh, and Ambar Roy. Young Guha was also given an opportunity.

There was another curious inclusion. Subimal Chuni Goswami is usually remembered as one of India s greatest footballers. Goswami played only for Mohun Bagan, scoring 264 goals in 437 matches. For India he had 50 in 32 appearances. He was also offered to train for Tottenham Hotspur. However, he is remembered best for leading India to a Gold Medal in Asian Games Jakarta 1962 and Silver in Asia Cup 1964 at Tel Aviv.

Sobers rested himself again, as did Hunte; Hall led the side. The tourists were a formidable side, including Rohan Kanhai, Lloyd, Deryck Murray, Charlie Griffith, Seymour Nurse, Jackie Hendriks, Lester King, and Robin Bynoe.

The atmosphere was conducive, and Hanumant had no hesitation in giving the new ball to Guha and Goswami. He knew that under the conditions, his spinners Chandrasekhar Joshi (leg-break) and Mohammad Siddique (left-arm spin) were merely back-up options.

Guha struck early, trapping Bynoe leg-before. This brought Kanhai to the middle. The great man took a leg-stump guard, as was norm. Unfortunately, the wind, combined with the skills of Goswami, made life difficult for Kanhai. After facing two balls from Goswami, Kanhai was forced to change guard: To hell with it, the Indian balls are swinging too much. Give me the off-stump!

Hanumant and Goswami had a long conversation. The plan remained the same: the bowlers would not change their lines. Kanhai scavenged for singles, managing only 4 before Joshi caught a loopy leading edge off Goswami at gully. Bryan Davis was bowled by Goswami on the same score, and suddenly the tourists were 26 for 3.

Lloyd and Murray batted soundly, wearing the new-ball bowlers down. On came Joshi; Hanumant alternated his seamers from the other end. Lloyd and Murray added 48 before Guha broke through again, while Joshi removed Murray.

The rest of the line-up crumbled in front of Guha (4 for 64) and Goswami (5 for 47). The West Indians were reduced to 108 for 7 before some spirited batting from Hendriks and Hall made sure they reached 136.

It was a paltry total. To make things worse, West Indies received another shock once Griffith broke down after sending down a mere 2 overs. However, the tourists still had Hall and King, supported by the left-arm spin of Rex Collymore. Surely that would be too much for the hosts?

Hall bowled with fire, taking out openers Daljit and Deb Mukherjee with 21 on the board. It was at this point that Saxena played one of the finest innings of his career, racing to 49 against Hall and King.

The third wicket fell on 99, and Hanumant and Roy prevented further damage till stumps. They finished on 114 for 3, trailing by a mere 22.

More of Guha and Ganguly

King struck twice the second morning, removing Hanumant and Roy in quick succession. The captain had scored 52, but there was still work to be done. Sharma fell to Hall soon afterwards, and at 163 for 6 it seemed the West Indians would claw their way back into the match.

But once again, Goswami and Guha rose to the task. Subodh Sharma scored a gritty 32, but the deciding innings came from Guha (46), who added 44 with Goswami (25). Joshi, too, hung around, helping Guha add another 44. Hanumant declared when King cleaned up Guha. The lead had stretched to 147.

It did not take long: Bynoe and Davis fell in quick succession. Hall promoted Griffith to No. 3, probably to give him more rest before the second innings. Guha claimed him in no time, and the score read 26 for 3.

Once again Lloyd fought back, this time in the company of Kanhai. The pair put up some resistance, but the West Indians lost 4 wickets for a solitary run: from 58 for 3 they were left reeling at 59 for 7.

Hall and King swung their bat around, saving the tourists from the ignominy of getting bowled out for a two-digit total. Then, with the score on 100 for 8, Hall lofted one off Guha towards square-leg.

Goswami recollected the catch in his autobiography (I am providing a translation): I was fielding at deep mid-on. The skier went towards deep square-leg. I ran like a sprinter, keeping an eye on the ball. I must admit that the ball was hit high enough for me to pull it off. Even then, I could not get both hands to the ball. I simply stretched my right hand out, and the ball stuck.

The day s play ended with the tourists on 103 for 9. King got out without a run being added the following morning caught Goswami bowled Guha. Guha (7 for 49) and Goswami (3 for 50) had bowled unchanged through the second innings, pulling off one of the most sensational victories in the history of Indian cricket.

– West Indies took out their fury on the Indians in the second Test. No Indian batsman reached 40 as the tourists won by an innings. The match saw counterfeit tickets being sold thanks to a few corrupt officials, was marred by crowd violence. The tour went on only after Frank Worrell intervened.

– EAS Prasanna s 8 for 87 gave South Zone a 12-run lead, but they lost comfortably after being bowled out for a mere 62 by Griffith and King. The third Test at Chepauk turned out to be an exciting draw: chasing 326 West Indies were reduced to 193 for 7 before Sobers (74*) and Griffith (40*) batted for 90 minutes. Stumps were drawn with West Indies on 270 for 7.

– The tourists drew against Ceylon. Following a couple of brave declarations they beat Indian Board President s XI (led by, of all people, a 51-year old Vijay Hazare, who scored 68 and 21) as well.

– Both Guha and Saxena made it to India s tour of England that summer.

– Goswami never played for India, but led Bengal to the final of Ranji Trophy 1971-72. 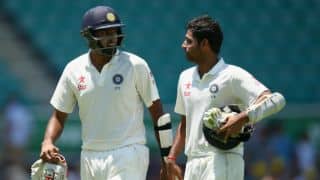 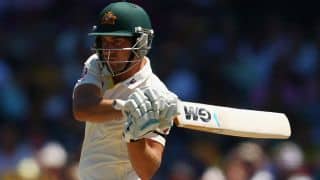