Born on May 26, 1988, Sunil Narine is yet another player who has carved his status as a world-class Twenty20 bowler. Abhijit Banare recaps the career of Narine in brief.

Twenty20 (T20) format doesn’t have as long a history unlike Test cricket or One-Day Internationals (ODIs). But after few years, Trinidad & Tobago (T&T) will be remembered as a team which supplied countless T20 ‘legends’. Kieron Pollard, Ravi Rampaul, Lendl Simmons, Dwayne Bravo. But the most popular of them all seems to be Sunil Narine. If not for T20s, he would have faded away in some other format, but T20 format has fueled his confidence. The Champions League T20 and Indian Premier League (IPL) turned Narine in to a star player.

Narine had represented West Indies in the Under-19 World Cup in 2006. But the big moment came few months later when he played for Rayad Emrit’s XI against Samuel Badree’s XI in  a four-day trial  match. Narine’s figures read 21.1-4-55-10. It was in February 2009, he made his First-Class debut for T&T against  Leeward Islands. The 2011 Champions League T20 also made a difference, where he picked up 10 wickets. Until then, he had helped T&T to wins in the domestic 50-over matches and the regional four-day matches. He was drafted in to the national side during the 2011 tour to India.

The IPL contract: Just like with Pollard in 2010, Narine managed to bag a bounty after his Champions League stint in 2011. Kolkata Knight Riders (KKR) bagged their trump card in the 2012 auction with Narine. With 24 wickets and bamboozling world-class batsmen, Narine had truly arrived on the world stage as KKR registered their maiden title finish with the mystery spinner being Man of the tournament.

Bowling style: Narine has an uncomplicated bowling style with a high-arm release. Batsmen usually watch the bowler in two ways, some focus on the seam of the ball, it’s revolutions or focus on the bowler’s fingers, wrists. But Narine has managed to trick the batsmen on both counts. He has two key deliveries, one is the normal off-spin, the other ’knuckle ball’ that comes out of the front of the hand which tends to behave like a leg-break. It is done with him flicking his index and middle finger. He bowls the off-spinner with scrambled seam and that makes it hard for batsmen to decipher his modus operandi.

One of the natural advantages for Narine are his long fingers which makes it easy to turn the ball with ease. Some other spinners would have had to give it a rip and in the process the finger movement could be deciphered, but Narine isn’t a big turner. However, minor deviations are enough to trick a batsman. He can also get bounce. Even when wickets are not turning, he has managed to beat the batsmen with bounce.

Till today, Narine has played only 13 First-Class matches, but he is not short of any maturity in bowling at the international level. He has played six Tests, but the lack of any urgency for batsmen unlike in T20s has made a difference. Though he has a five-for in Tests and two in ODIs, all against New Zealand. Narine has been a fine limited overs bowler, but there’s still a long journey to develop in to a fine Test bowler. 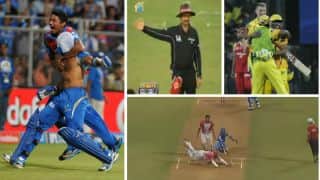