Bhuvneshwar Kumar was awarded Player of the Match for his 2 for 28 against Gujarat Lions in IPL 9.

Sunrisers Hyderabad (SRH) put up a commanding show by defeating Gujarat Lions (GL) by 5 wickets in the ninth edition of Indian Premier League (IPL) at Hyderabad. It was GL’s third consecutive loss and will be itching to get back to winning ways. SRH, on the other hand, jump to 4th place and are in top contention to clinch this year’s IPL extravaganza. Nonetheless, Bhuvneshwar Kumar was awarded Player of the Match for his 2 for 28. Though it was a low-scoring game, it went down to the penultimate over due to the sticky wicket dished out by the curators. Let’s walk through this contest’s highlights that kept the crowd on its feet: FULL CRICKET SCORECARD: Sunrisers Hyderabad vs Gujarat Lions, IPL 2016, Match 34 at Hyderabad

Ashish Nehra and co.’s stellar performance with the ball: SRH bowlers were right on the money yet again; they bowled a tidy line and length and swung the ball both ways. The pace duo of Bhuvneshwar Kumar and Ashish Nehra started the proceedings by bowling back-to-back maiden overs. To make matters worse for GL, both Barinder Sran and Mustafizur Rahman continued the spectacular bowling display by not letting the GL batters free their arms. Swing, change of pace, perfect yorkers: it was a delight to watch the SRH bowlers in action tonight. Other than Moises Henriques, none of the bowlers conceded over 7 runs an over.

SRH’s brilliance in the field: Kane Williamson and and substitute Vijay Shankar pulled off absolute blinders to put SRH in the driver’s seat. Dinesh Karthik edged Mustafizur’s off cutter to the left of Williamson at backward point. Williamson, the flying machine, timed his jump to perfection to take a one-handed catch. On the other hand, Shankar at deep square leg pouched a beauty centimetres away from the boundary line. On both occasions, Third Umpire took his own time to make the final verdict.

Aaron Finch scores 4th fifty of IPL 9: Despite being out of action for a couple of matches, Aaron was yet again in thick of the action. While others kept chipping away easy wickets, he stood his ground a plundered a steady half-century off 42 balls. It was his innings that helped GL score past 120.

Yuvraj Singh’s superstar entrance: As soon as Yuvraj stepped on the field to bat, the crowd erupted in joy. The DJ played ‘Singh is King’ to add more glamour to his entrance. However, his short stay was ended by Dhawal Kulkarni on 5.

Shikhar Dhawan yet again plays match-winning innings: Dhawan played an innings of substance to take his team over the line. Like it happened with Finch, Dhawan also put value on his wicket and kept the scoreboard ticking. His unbeaten 40-ball 47 was studded with 6 boundaries. 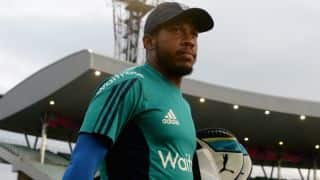