Sunrisers Hyderabad (SRH) defeated Royal Challengers Bangalore (RCB) by 15 runs in the 27th match of the ongoing Indian Premier League (IPL) 2016 tournament. Sunrisers set a daunting target of 195 against Bangalore, with their captain David Warner hitting a belligerent 92 off 50 balls. In their reply, RCB kept fighting till the end but lost the game eventually by 15 runs. This was the fourth defeat for Royal Challengers Bangalore (RCB) in six matches, and the going gets tough for Virat Kohli’s men going further into IPL 2016. Let us take a look at the highlights of the SRH versus RCB IPL 9 match at the Rajiv Gandhi International Stadium in Uppal, Hyderabad. Full Cricket Scorecard: Sunrisers Hyderabad vs Royal Challengers Bangalore, IPL 2016 Match 27 at Hyderabad

David Warner goes berserk: The Sunrisers Hyderabad (SRH)captain was on a rampage, as he struck 92 off mere 50 balls with 9 boundaries and 2 sixes. Warner was at his brutal best, striking boundaries and sixes at will. The highlight of Warner’s innings was simply the ease with which he was finding the gaps, even with RCB having their best fielders in Virat Kohli and AB de Villiers placed at long on and long off respectively. It was unfortunate for Warner to miss out on a deserving century, but he provided his team a dream start to the contest.

Kane Williamson makes mark: The New Zealand batsman played his first game of IPL 2016, and played a memorable knock. While Warner kept striking, he was happy playing the second fiddle and kept on going run-a-ball for a major part of his innings. Williamson opened up after sometime, playing some clean strokes around the park to raise his half-century in 37 balls with the help of 7 boundaries. Williamson fell on the next ball, but he did a great job for his side.

Moises Henriques’ onslaught: The all-rounder might not have been around Australia’s plans in limited-overs cricket, but he surely is the preferred choice for Warner. Henriques batted lower down the order on Saturday night, but he proved his mettle with a quickfire innings that helped Sunrisers Hyderabad (SRH) cross the 190-run mark. Henriques struck 3 sixes and 1 boundary to remain unbeaten on 31 off 14 balls, and helped his side finish on a high after making a splendid show with the bat.

Virat Kohli’s rare failure: Kohli had a brief stay at the crease against Sunrisers Hyderabad (SRH), striking only 1 boundary in his innings of 14 off 17 balls. While Kohli had a rare failure with the bat in this tournament, he still managed to create yet another batting record. Kohli, during his innings of 14, completed 1,000 runs in T20 cricket in the year 2016. He has made runs in Asia Cup 2016, in the ICC T20 World Cup 2016 as well as in the IPL. Heading into this game, Kohli was the Orange Cap holder, which was snatched away from him by Warner with his magnificent knock.

AB de Villiers makes SRH pay: The fall of wickets at regular intervals put pressure on AB de Villiers, who was given as many as three lifelines. Ashish Nehra spilled a tough catch at deep fine leg, and then Deepak Hooda dropped him at extra cover few overs later. De Villiers eventually fell for 47 off 32 balls, with 3 boundaries and 2 sixes.

KL Rahul makes a point: The right-handed batsman played a fine innings, but it was not enough. Rahul was very impressive with his wicketkeeping skills in the first innings, and with the bat, he chipped in with a fine half-century. Rahul faced 28 balls to score 51, with the help of 6 boundaries and a six. His wicketkeeping skills are improving with every passing game and RCB management would be delighted with his progress. 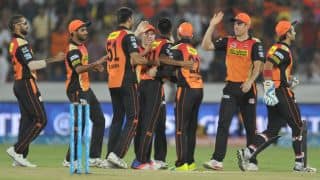