DD rode to a comfortable and a healthy seven-wicket win over hosts SRH, in Match 42 of the ongoing IPL 2016, at Hyderabad.

As visitors Delhi Daredevils (DD) rode to a comfortable and a healthy seven-wicket win over hosts Sunrisers Hyderabad (SRH), in Match 42 of the ongoing Indian Premier League (IPL) 2016, at the Rajiv Gandhi International Stadium in Hyderabad on Thursday, it was also an important win for DD, as it definitely kept their hopes alive of making it to the playoffs, as they also busted into the top four phase of the points table. The match produced quite a few highlights and was indeed one of the fairly good matches of the competition, as Ayush Gupta takes his time out to present those. Full Cricket Scorecard: Sunrisers Hyderabad vs Delhi Daredevils, IPL 2016, Match 42 at Hyderabad

David Warner’s solid knock of 46: When it comes down to David Warner, it has to be something special, as his explosive batting is meant to do so. Nevertheless, his batting again did some talking as he played a solid knock of 46, that allowed SRH to put up an average total, as he was also involved in a 67-run opening stand along with Shikhar Dhawan. His knock came off 30 balls, including six boundaries and a four, along with a strike rate of 153.

Shikhar Dhawan’s steady knock of 36: The classy Indian opener has been in good form of late, as he played a steady knock today as well, that consisted of 36 runs, thus allowing SRH to get off to a firm start. His knock came off 37 deliveries, including three boundaries, a long with a strike rate 92. HE was also involved in a strong 67-run opening stand along with skipper Warner, that indeed made the opening pair strong enough for SRH. Full Cricket Updates Sunrisers Hyderabad (SRH) vs Delhi Daredevils (DD), IPL 2016, Match 42 at Hyderabad

Warner-Dhawan’s strong 67-run opening stand: Not just their individual partnership, but both Warner and Dhawan were involved in a strong opening 67-run stand, that indeed allowed SRH get off to a fair start, and set a good platform for a good total. Nevertheless, their batting failed to fire following the break of this opening stand. Warner contributed 46, while Dhawan contributed 16 in the stand.

Quinton de Kock’s classy knock of 44: DD were off to a sturdy start, especially in the form of their classic opener Quinton de Kock, who played a classy knock of 44, which allowed DD to get off to a burly start in their inning and their pursuit for the total of 147. His knock came off 31 balls, including five boundaries and a couple of sixes, along with a strike rate of 142. However, his dismissal was not a fair one.

De Kock’s controversial dismissal: Although de Kock played a classy knock of 44, it could have been more had it not been for his controversial dismissal off Moises Henriques. As he was given caught behind for the dismissal, there appeared to be hardly any contact with the bat with the ball that carried to the wicketkeeper Naman Ojha. However, umpire Marais Erasmus gave his verdict as out, while replays showed that there was no knick.

Sanju Samson-Rishabh Pant’s match-winning stand of 72: It was at the end in the form of Sanju Samson and Risabh Pant, who put up an elegant stand of 72 runs, which was also the match-winning stand, as both these men made sure that they steered DD to the win, and keep their playoffs qualification chances fairly alive. Samson contributed 31, while Pant contributed 39 in the stand. 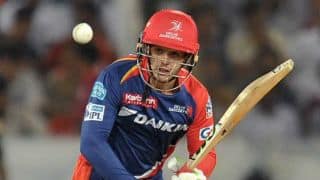