Sunil Gavaskar, if he takes up the responsibility, could have a Herculean task ahead of him.

The Supreme Court ultimatum underlines the extent of murkiness that surrounds BCCI right now. Arunabha Sengupta writes that these bleak circumstances may provide the ideal opportunity to clean up the many layers of misdeeds in the Board.

Cricket in India has seldom been a stranger to controversy, conflicts or even occasional vacillations on the brink of crisis. But, seldom has the sport and its governing body hurtled headlong into cataclysmic devastation as things stand today.

The Supreme Court’s ultimatum has rung out loud and clear.The murkiness of the Board of Control for Cricket in India (BCCI) has spread alarmingly across the face of the beautiful game, almost hiding the action on the field from general view. The transgressions cannot be ignored any more. The game that has for long been a source of national well-being, the vehicle of prestige for countless Indians, has been reduced to a starkly conspicuous badge of shame. The house of the most popular sport of the country has been branded with a coat of arms depicting undeniable corruption.

Yet, every threat carries with it a whiff of opportunity. And perhaps the many sins of BCCI that have stepped over the tipping point of greed have finally given Indian cricket the fortuitous chance for a clean-up act. Cricket, with its many tales of valour, bravery and glory, now has to step into the slimy corridors of power and cleanse the many layers of polluting soot and stain that have crept in at furious rate in recent times.

Mythology teaches us that even the most heroic of endeavours can be punctuated with the humiliating task of washing away filth. Among the 12 tasks of Hercules, the fifth comprised of cleaning the Augean stables. The Greek Hero was required to rid the stables of King Augeas of mountains of waste from the thousands of cattle blessed with divine health — the premises that had not been cleaned for over 30 years.

If Sunil Gavaskar indeed follows the suggestions of the Supreme Court and steps in as the BCCI President, he will face a labour like Hercules. Whether Gavaskar is the ideal candidate for this role can indeed be debated. But, if he does assume the role, his task will be cut out — and not quite enviable. After his many gallant battles with the greatest bowlers of the world, he will have to deal with perhaps an even greater challenge – of ridding Indian cricket’s governing body of the felonious filth that has accumulated while the current herd brandished their near-divine powers.

Legend has it that Hercules accomplished the task by tearing huge holes in the walls of the cattle-yard,before digging trenches and thereby diverting the course of two rivers to flow through the area.It may be a lesson to Gavaskar or anyone else who takes over the responsibility of the cleansing act. It is perhaps most important to remove the walls around the Board and promote transparency in the machinations of the body before washing and rinsing it with the torrents of whatever solution there may be.

The shadiest of circumstances have provided the opportunity to wash away the vile layers of festering decay.It has to be accepted as such, to step the rot that has seeped into Indian cricket governance and to turn over a new leaf into a brighter morrow. 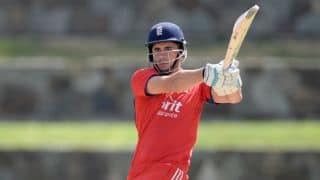