India can ill-afford Suresh Raina failing against the short-ball during the 2015 World Cup.

Suresh Raina was bounced out, yet again, during the first ODI between India and New Zealand at Napier. It is a flaw that continues to be a cause for concern for the Indian team management. Nishad Pai Vaidya says that Raina has to find a solution to the problem, else he will risk his spot for the ICC World Cup 2015.

It is a well established notion that Suresh Raina doesn’t fancy chin music. In the first One-Day International (ODI) between India and New Zealand at Napier, the new pace sensation, Adam Milne snared him with a half-tracker as the southpaw failed to keep it down and spooned a catch to fine-leg. It was yet another occasion where Raina was set up by the short ball by the opposition; although he may not have fallen to such deliveries too many times in the past, a constant barrage has often led to his dismissal. This glaring flaw in Raina’s game continues to be a headache for the team management as they plan for the ICC World Cup 2015.

It is almost as if every bowler, irrespective of pace, tries to unsettle Raina using the short deliveries. In the first ODI, Corey Anderson, a medium-pacer who touches 130 kmph at best, bowled short to get him to pull. Although Raina did control most of them very well, it did play on his mind. He was ready to play the shot even before the ball was delivered; or so it seemed. On one occasion, Anderson bowled it on a good length and outside the off-stump line; Raina was still ready to smash it with the horizontal bat through the leg-side. Once the quicker Milne came in, it was doom!

So, what does the team management do? Raina has been a proven performer in the shorter formats — a finisher in the middle-order who builds on the platform provided by the top-order. However, the next World Cup would be played Down Under; where surfaces have more bounce and Raina may find it tough to score freely. In modern cricket, no technical flaw is hidden and Raina’s predicament is the talk of the town amongst bowlers for years. India can ill-afford a spot in the middle-order taken by a batsman who struggles to the rising delivery, especially when you are playing a major tournament on surfaces that aid bounce.

Go back to the 2012-13 season. Raina was in good form and finished numerous ODIs for India. It did show what he was capable of in pressure situations and more so reflected on his temperament.

But, one look at the games India played then would tell you that all were in the sub-continent, barring one. It isn’t often that he has struggled abroad though in ODIs. During the 2011 tour to England, Raina had a torrid time during the Test series, but hit back in the ODIs. He was ready to attack the short ball and played it with more conviction. One hasn’t seen that too often from him as he tends to be tentative with the half-trackers. Even when he is pulling, he plays a half-shot, devoid of control. Even if they go in the air, you aren’t going to get too many boundaries in the huge grounds in Australia.

But, Raina’s recent struggle has been prolonged. He didn’t get too many games during the ICC Champions Trophy 2013 and one can say that it was because the Indian top-order was in great form and he wasn’t really needed. On subsequent tours to the Caribbean and Zimbabwe, he failed and could only record one fifty. Plus, when the Australians arrived later in the year, he didn’t get too many runs despite the team management backing him for the No 4 spot.

Here is his record since the Champions Trophy:

There is no doubt about Raina’s talent though. On his day, he can smash it around and is a genuine match-winner; a crafty performer who can milt runs in the slog overs. However, Raina has to sort his problems out before the World Cup as India are only a year away from the tournament. Since he has been a fixture in the side for a few years, his struggle does become worrying and if he can find a solution, India would be well-served. Time may be running out for Raina. 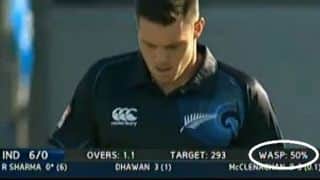