Why the club’s decision to rename the Lambeth Hall to Douglas Jardine Suite indicates that the wound is on its way to healing.

For years Douglas Jardine could not be thought of without being associated with the ugliness of the controversial Bodyline series. Arunabha Sengupta writes why Surrey County Cricket Club’s decision to rename the Lambeth Hall to Douglas Jardine Suite indicates that the wound is on its way to healing.

From hero to villain

For years after his death Douglas Jardine remained one of the most complex characters in the game.

He came back as a hero after the victorious 1932-33 series to be hailed as one of the greatest captains of England. That was before MCC suddenly sat up realise that the supposed leg-theory, otherwise known as Bodyline, was fast becoming a diplomatic hot potato which would singe and blacken their time-honoured, pristine image, the bouncers thudding into the batsmen would drown all the tall talks of spirit of cricket and the dictum of sportsmanship. Jardine’s transformation into the villain — already complete in Australia — took just a couple of seasons to be formalised in his homeland as well.

He led the side at home against the West Indies in the summer of 1933. During the series Jardine himself showed the rest of the cricketing fraternity how to counter the tactics when Learie Constantine and Manny Martindale unleashed Bodyline at the English.

He led England to the first Test tour of India in 1933-34, and there too ruffled a lot of feathers by playing too hard and to win. Under his instructions, Nobby Clark and Stan Nichols sometimes resorted to hostile bowling — resulting in quite a few injuries. They were responded to in kind by Mohammad Nissar and Amar Singh. There were clashes with the Viceroy as well, about the inclusion of Maharaja of Patiala in the MCC side.

By then, there were numerous voices up in protest against leg-theory. MCC, under some significant pressure from the political powers of the day, introduced the change of rules.

The Australians, visiting in 1934, were not very keen on playing against Jardine again. Plum Warner, manager of the tour in 1932-33, performed his usual turncoat act. He had earlier backed Jardine for the top job. He had come back from the tour saying, “If ever there was a cricket match between England and the rest of the world and the fate of England depended upon its result, I would pick Jardine as England captain every time.” Now, he commented that Jardine should not lead any more. However, some other important people, like Lord Hawke, hesitated, not too eager to let the English captain down.

Jardine himself stepped in to resolve the deadlock. In March 1934, he told Surrey that he would be unable to play regularly anymore because of business commitments and resigned as captain. Next, he announced in the Evening Standard: “I have neither the intention nor the desire to play cricket against Australia this summer.”

He played no more Test cricket, and turned out in only three more First-Class matches.

Whether or not he was secretly forced into retirement is left to conjecture, some of it backed by convincing circumstantial evidence. But the truth remains that Jardine knew he had carried out his mission. He was not apologetic, nor did he demonstrate any sign of remorse. The only error of judgement he acknowledged was his act of switching Harold Larwood’s field to the posse of leg side fielders immediately after Bill Woodfull had been struck on the heart at Adelaide.

Naturally, Jardine was seldom remembered without the stigma of the unpleasant tour. The phenomenal captaincy record of nine wins to one loss and the batting average of 48 were scarcely recounted. He remained the man who had tried so hard to win a Test series that he had almost brought two countries to the brink of diplomatic crisis.

Jardine himself did not turn reclusive. He served in the War with distinction. When the Australians visited in 1953, he was very much a member of the welcoming party. When, during a dinner, Australia’s cricket loving Prime Minister Robert Menzies joked that the Australians considered him, Menzies, to be the biggest bastard ever born, Jardine politely interjected, “But, Prime Minister, I believe I still have that honour.”

The Surrey County Cricket Club’s decision to honour their former county captain by renaming the Lambeth Hall after him is further proof that time, though slower in its ways than usual, is finally on its way to healing the ugly wound.

He remained witty, even amiable, and at peace with the way he had been virtually ostracised during his final cricketing days. In 1953, he became the first President of the Association of Cricket Umpires, and later held office as the president of the Oxford University Cricket Club. During the cricket season he reported the matches diligently from the press-box, sometimes even trespassing the unwritten rule of journalists and applauding a batsman.

All this while he was working as company secretary at paper manufacturers Wiggins Teape. He had found spirituality, surprisingly, through Hinduism and used Hindustani as his second language. Later he became a director of a Scottish Australian Company and visited Australia again. He had his reservations at going back to the country that had never stopped hating him, but this time he had a wonderful time with Menzies, Charlie McCartney, Warren Bardsley, Arthur Mailey, and one particular expat by the name of Harold Larwood.

He died prematurely, from lung cancer, breathing his last in Montreux, Switzerland, in June 1958. The next day, England faced New Zealand at Lord’s and the flags were lowered to half-mast. There were obituaries from many luminaries of the cricket world, not least from Woodfull and Warner. The one man who declined to comment was Don Bradman. For long the walls of the Long Room at Lord’s were adorned by portraits of Bradman and Jardine, hanging close enough to each other to pierce each other with stares.

Jack Fingleton, Bill O’Reilly and others could perhaps forgive him in the long run, but for most Jardine remained the symbol of ruthlessness and the zeal to win at any cost. While most often the images of past cricketers mellow and get glorified with age, the austerity surrounding England’s Bodyline captain remained constant.

In 1989, John Arlott wrote: “It is no exaggeration to say that, among Australians, Douglas Jardine is probably the most disliked of cricketers.”  Christopher Douglas equated his name as much with “legendary British qualities of cool-headed determination, implacable resolve, patrician disdain for crowds and critics alike”, as with “the legendary British qualities of snobbishness, cynicism and downright Pommie arrogance.”

Gideon Haigh remarked that Jardine was the most reviled character of sport. But, at the same time, he hinted that the modern times however indicate that the name Jardine is being viewed with more sympathetic assessment.

According to Haigh, “Confirmation of his complete rehabilitation, at least in English eyes, was then perhaps provided by the cover of Wisden Cricket Monthly in February 2002, which acclaimed Nasser Hussain as showing ‘Shades of Jardine’ in his deployment of a leg-side attack to restrain India at Bangalore. The background to Hussain’s image was indeed a shade of Jardine, loitering palely, like an apparition in one of those trick photographs favoured by Victorian spiritualists.”

Now, the Surrey County Cricket Club’s decision to honour their former county captain by renaming the Lambeth Hall after him is further proof that time, though slower in its ways than usual, is finally on its way to healing the ugly wound.

Situated at the base of the OCS Stand at the Kia Oval, this conference centre with two dedicated bar areas will be known as the Jardine Suite. There is a capacity of up to 650 guests, and the venue offers state of the art air-conditioning and the option for high tech audio visual facilities.

Such banquet and conference facilities in cricket grounds are becoming more common across the world, but what is significant is the addition of Jardine’s name to the landmarks of the historic ground.

The recognition has been late, but it is a welcome one for the man who remains one of cricket’s greatest strategists. 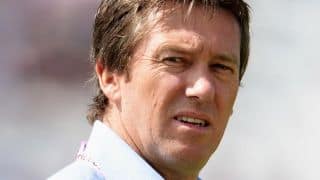 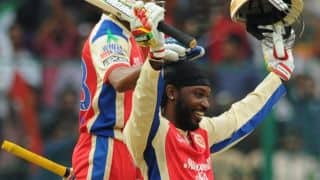