With injury to Yuvraj Singh ruling him out of the tournament, one of Ajinkya Rahane or Manish Pandey will be expected to play against West Indies

The blockbuster game is finally here. India are set to take on West Indies in the 2nd semi-final of ICC T20 World Cup 2016 on Thursday at Wankhede Stadium, Mumbai. Both the teams are coming on the back of three wins and a solitary loss in their group stages. And with Chris Gayle and Virat Kohli in their arsenal, both teams have equal firepower to dominate the opponent. With a fixture against England in the finals at stake, expect a hard fought game between the two sides. India though, would feel a little insecure heading to the fixture, considering the lack of form of most batsmen except  Virat Kohli. FULL SCORECARD: India vs West Indies, 2nd Semi-Final match at Mumbai

For India, a misfiring batting order has put world’s pressure on Virat Kohli to score runs. His unbeaten 55 against Pakistan and an unbeaten 82 against Australia exemplified his batting class. But India will fear if Kohli fails, they are in for some serious problems. Their issues were further worsened due to injury an to Yuvraj Singh, who has been ruled out of the tournament. A good point for India though has been their bowling. Both the pacers and spinners have been outstanding. With the bowling unit certain to remain same, we have a look at the probable Indian XI, which is sure to have at-least one change. ALSO READ: India vs West Indies, ICC World T20 2016, Semi-Final 2 at Mumbai: Chris Gayle vs Ashish Nehra and other key battles

Top Order: The less said, the better about India’s current openers. Both Rohit Sharma and Shikhar Dhawan have been terrible. Their shortcomings have been badly exposed in this tournament. Yet, there is a small array of hope, considering Wankhede is the home ground for Rohit, which may just fire him up. Regarding Shikhar, he has been given a tag of ‘Big game’ player, which he will want to live upto. It is a certainty if Dhawan again fails to fire, his days will surely be ended in T20I’s.

At No.3, there is a batsmen who is in a league of his own. Virat Kohli has just given a new meaning to T20 batting. While most batsmen see T20 as a stroke-playing, six hitting game, Virat’s controlled innings is all based on one’s and two’s, classy shots and occasional boundaries. The unbeaten 82* against Australia further enhanced his reputation as the best chaser of the game. India will completely rely on him again for runs. ALSO READ: T20 World Cup 2016: Shikhar Dhawan deserves one last chance amidst shocking form

Middle Order: The middle order suffered a huge blow, as Yuvraj was ruled out of the remainder of the tournament. While he himself wasn’t looking very convincing, his knocks of 25 against Pakistan and 21 against Australia showed grit and determination, which saw him build a crucial partnership in both the games with Kohli. He is set to be replaced by one of Ajinkya Rahane or Manish Pandey. Rahane is a classic player, and hass been waiting for his opportunity since ages. Pandey though, can stake claim in the side, by reminding everyone of his unbeaten century in an ODI against Australia at the start of the year. Whichever batsmen replaces Yuvi, will have a huge role to play in the side,

Also in the middle order is Suresh Raina, who has been another of the disappointing players in recent times. With lot of faith shown in him, he was placed at no.4 ahead of Yuvraj in every game. Yet, his batting displays have been poor to say the least. With another do-or-die game, Raina will have to fire on all cylinders, otherwise he may just follow Dhawan out of the team. Completing the middle order are MS Dhoni and Hardik Pandya. Both the players haven’t done anything wrong in the tournament yet, and Dhoni’s 30 run knock against New Zealand would have given him confidence. Pandya on the other hand, has shown he can strike the ball out of the park, but is incapable to play a composed innings. ALSO READ: India vs West Indies, T20 World Cup 2016: Should Harbhajan play to encounter ‘Gayle storm’ in 2nd semi-final?

Lower Order: The best thing coming out of India’s campaign till now has been the performance of their bowling unit. While the batsmen – barring Kohli – have been under the radar, bowlers have bailed India out in every game. The pacers old-young duo of Ashish Nehra and Jasprit Bumrah have been excellent. Nehra’s experience combined with Bumrah’s slower ball and yorkers have been a treat to watch, and they will hope to be at their best against a certain Chris Gayle.

Their spin has also been productive in the ICC T20 World Cup 2016. Both Ravichandran Ashwin and Ravindra Jadeja have done decent job of containing runs as well as picking wickets. Yet, a problem India have faced is both the bowlers have not bowled particularly well in the same game of this tournament. In the last game against Australia, Jadeja bowled beautifully but Ashwin was taken for runs all over the park. Still, expect a good showing from both these players. 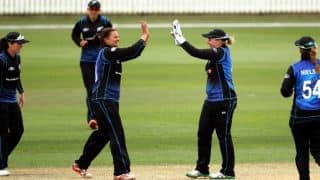 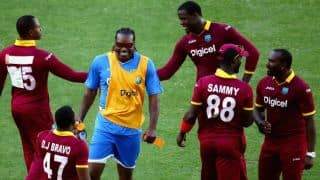