David Warner will have to lead the resurgence in pressure situations to help his team clinch the maiden World T20 trophy.

Australia has already lost a match in the ICC World T20 2016 and will face elimination only four days into the T20I campaign if they lose against Bangladesh at Bengaluru’s M Chinnaswamy Stadium. Australia will have to leave no stone unturned to wrestle back into the tournament. Moreover, Bangladesh is not the team it was a couple of years ago. They have shed the ‘underdogs’ tag ever since they outwitted Pakistan, India and South Africa on their home turf. However, both the teams will have to perform out of their skin to stay alive in the tournament. Full Scorecard: Bangladesh vs Australia, Live Score, 22nd T20 Match, Super 10 Group 2

Australia have been facing selection woes in the shortest format of the game. Aaron Finch, who not long ago was the captain of the side, is ranked No. 1 in ICC T20I batsman rankings. And a player of his class is being left out of the playing XI. The reason is, they have four openers in the rankings: Usman Khawaja, Shane Watson, David Warner and Finch himself. Unfortunately, Finch was ruled out of the T20I series against India Down Under due to hamstring injury, and eventually lost the captaincy as well.

Australia’s selection committee tried and tested number of combinations in Australia’s tour of South Africa last month: Khawaja-Finch in the first ODI, Finch-Watson in the second and Khwaja-Watson in the third. And these combinations are the evidence to the fact that the Australian team management wants Warner to bat down the order. Hence, Australia’s middle-order conundrum came to the surface.

In the 4 matches Warner did not open, he scored 20, 77, 33 and 6. These numbers are not ordinary for batsman who has opened for the better part of his cricketing career. Nonetheless, Australia needs someone who can bat throughout the innings and build partnership as the game progresses. In Australia’s first match of ICC World T20 2016 against New Zealand, Australia looked in total control of the chase, as Australia were 50 for 1 after the batting Powerplay and required only 93 off 14 overs. However, Australia’s vulnerability to play on slow tracks was exposed and thus the downfall began. Aussies lost 8 wickets, scoring only 84 runs in the remaining overs.

Australia captain and no. 3 batsman Steven Smith has been at his destructive best, lately. For many obvious reasons, Australia’s no. 5 batsman Glenn Maxwell is not someone who can bat throughout. Mitchell Marsh has the stroke-making ability, but chipped away his wicket while covering the boundary line against New Zealand. James Faulkner has been Australia’s only successful finisher since 2013, but struggles on subcontinental tracks. So, the question is: who should Australia rely on to take them over the line in pressure situations?

Is Warner the solution to the perennial problem? Warner has been Australia’s go-to player in the shorter formats. Warner has scored 14 half-centuries in T20Is, which is the third most overall and the most by an Australian. Plus, his 77-run knock against South Africa in the second T20I versus South Africa while chasing 205 was an innings of substance and proved that he has the mettle to bat at the middle-order. Therefore, the onus will be on the belligerent and diminutive southpaw to hold Australia’s innings together and mount pressure on the opposition.

Big scores are due from the classist Smith. Maxwell will deliver a characteristic innings when he is on song. Marsh and Faulkner will put the opposition on the back foot with their attacking brand of cricket. However, it will be Warner who will have to lead the resurgence in pressure situations to help his team clinch the maiden World T20 trophy. 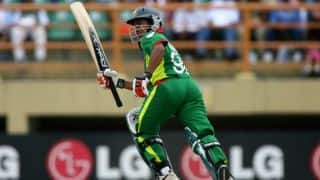