Mohammad Shami's absence for well over a year has led India to yet another star.

Jasprit Bumrah has been nothing short of a revelation for the Indian team since his debut a couple of months back in Australia. He brought back the delivery that none in the Indian bowling line-up could bowl on a consistent basis — Yorker. On his international debut Bumrah was a treat to watch as he bowled some excellent toe crushing Yorkers. One of the Yorkers got rid of James Faulkner as well. Before Bumrah, it was perhaps Mohammed Shami, who possessed the ability to bowl Yorkers on a consistent rate. But his absence for well over a year has led India to yet another star. FULL CRICKET SCORECARD: India vs Australia, Match 31, ICC World T20 2016 at Mohali

Bumrah has been used sensibly by his captain in the shortest format. He bowls an over before powerplay, comes back for an over in the middle and then is called upon to bowl in the death. Bumrah is most deadly in the death, even after being proven expensive in the earlier overs. The batsmen around the world have had enough time to see what Bumrah is capable of and are mentally prepared for his Yorkers. He is a clever bowler and sometimes foxes the opposition with his slower deliveries outside off as well.

After going for 19 runs in 2 overs, Bumrah conceded just 13 in his next two against Bangladesh in the previous match, which was one pivotal in ensuring that India won and stayed alive in the T20 World Cup 2016. Bumrah in pursuit of Yorkers, sometimes misses his length and it ends up being a full toss, but none of that could be seen in the final two overs he bowled. The penultimate over of any innings is considered to be the most crucial one and it is given to the best bowler in the side. Bumrah is MS Dhoni’s favourite choice to bowl that over and he has delivered on most occasions. Plus, more overs Bumrah has left up his sleeve, more the advantage for India. Too add on, it gives India the psychological edge as well.

India have a perfect balance in their bowling with Ashish Nehra, Ravichandran Ashwin, Ravindra Jadeja and Hardik Pandya. Bumrah has the capability to bowl at any period, which just strengthens Indian attack.  But the way Bumrah is used could eventually decide the match. He is sure to bowl at least two out of the last four overs. Is four could eventually decide the match. 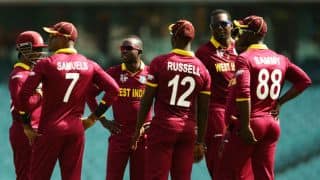