Born April 3, 1964, Tariq Iqbal was a part of the Kenyan cricket team that upset West Indies in Cricket World Cup 1996. Abhishek Mukherjee looks at a bespectacled, overweight wicketkeeper whose name has been etched in history forever alongside Brian Lara’s.

Tariq was overweight, and that is an understatement. He also wore glasses, and did not switch to contact lenses even when he played in the 1996 Cricket World Cup. Given his girth and eyesight (which, obviously, was not 20/20) he had probably not expected to make an appearance. The Guardian observed that Tariq wore “a blue headband and a double chin” while keeping wickets.

Unfortunately (or fortunately) for him, Kennedy Otieno, who would go on to play for Kenya for 13 years, was injured during Kenya’s second match — against Australia at Visakhapatnam. Otieno took time to recover, and Tariq, the only other person in the side with any experience of keeping wickets, was drafted in for the next few games. These included the historic match against West Indies at Pune, which Tariq managed to be a part of — and claimed the catch of Brian Lara; but more of that later.

Tariq played 3 ODIs in all, scoring 17 runs at 8.50 and a strike rate of 32.7. His tally of victims amounted to 2 catches. Those were his only List A appearances as well. In all recorded cricket he played 28 matches, scored 558 runs at 21.46, claimed 32 catches, and affected 7 stumpings. Exactly why Kenya picked a rotund, bespectacled wicketkeeper in a World Cup squad remains one of the unsolved mysteries of cricket.

Tariq went to Technical High School, Nairobi. A regular for Swamibapa Club, Tariq scored 47 and took 4 catches for Kenya Cricket Association XI against Minor Counties Under-25s at Nairobi. It was his first recorded match. Selected for ICC Trophy 1986, Tariq had a decent tournament, scoring 152 at 25.33 and taking 13 catches from 6 matches. He even top-scored with 55 against Argentina.

Kenya Times wrote that Tariq “bats with lots of courage and has the ability to hit the ball very hard,” adding that he was excellent against the short-pitched delivery, specialising in the hook. “Every time he occupies the crease in the league matches fielders can expect a torturous time,” Kenya Times added.

ICC Trophy 1990 also turned out to be a decent outing for Tariq: 136 runs at 19.42, 6 catches, and 3 stumpings were not a bad haul. He played for Young Kenya (the Kenyan definition of the word “young” is probably a bit unconventional; Tariq was 30 at this stage) in 1994.

By the time ICC Trophy 1994 started, Otieno had arrived. Not only was Otieno a better batsman and wicketkeeper, he was also fitter and looked like a cricketer. Tariq played a solitary match, against Israel, and scored 32 not out. For some reason he was picked for World Cup 1996.

That catch of Lara

Tariq made his ODI debut against Zimbabwe at Patna. The match was rained off after Zimbabwe reached 45 for 3 in 15.5 overs batting first. As per the rules of the tournament, the match was re-played the day after. This time Kenya batted first, were bowled out for 134, and lost convincingly. Opening batting with Dipak Chudasama, Tariq was bowled by Charlie Lock for a 20-ball 1.

Then came the West Indies match. Otieno was fit, but not fit enough to keep wickets. Tariq played as wicketkeeper (and opener). To be fair, he batted quite well against Curtly Ambrose, Courtney Walsh, and Ian Bishop.

Both Chudasama and Otieno fell to Walsh with 19 on the board, but Tariq and Steve Tikolo held fort, adding 26 for the third wicket. Tariq flicked Walsh brilliantly for four, and when a short-pitched delivery from Bishop kept low, he pulled it ferociously to the fence. Then he tried one stroke too many; he tried to pull Walsh, top-edged, and Cameron Cuffy took the skier at mid-on. Tariq fell for a 32-ball 16. Kenya were eventually bowled out for 166.

Tariq started West Indies’ innings in style. A ball from Rajab Ali hit Richie Richardson on the pad and rolled to the fine-leg fence: Tariq did not make an attempt; he strolled a couple of paces to his left and let the ball go.

Martin Suji bowled outside off next over, and Sherwin Campbell shouldered arms; the ball kept a bit low. The 95-kilo Tariq was obviously not going to make a serious effort to anything that passed low. He knelt on his left knee: the ball brushed his left thigh on its way to the fence.

Tariq kept up with the good work, dropping Richardson in the next over off Rajab Ali. The ball raced to the fence. In the first four overs of the innings Tariq had managed to drop a catch and concede three boundaries. The Guardian mocked him, mentioning that he “had dropped the ball so many times before that his own bowlers were laughing at him”. Wisden reported that Tariq’s “stout figure and village-standard juggling had hitherto caused much mirth”.

Richardson was bowled by Rajab Ali and Campbell by Suji. However, Lara looked in control, and though the score read 22 for 2 and the KENYA JUU (approximately “Kenya on top” in Swahili) banners were out, Kenya did not stand a chance — especially with our hero behind the stumps.

Then it happened: Rajab Ali pitched one outside off; Lara tried to punish off back-foot, but it was too close to his body; Tariq took the catch, or rather, the catch took Tariq. The Daily Telegraph commented: “The ball sank somewhere into his nether regions and the gloves clutched desperately, trying to locate it. Then, glory be, it reappeared in his hands and was raised aloft in triumph and relief.”

On air, Keith Stackpole tried his best to be polite: “For his size it was a good attempt but any wicketkeeper in the world would have taken it.” It took our hero a couple of seconds to realise what he had done (or was it because of pain?) before he broke into an appeal.

With West Indies reduced to 65 for 6, Roger Harper decided to go for it; he hit three boundaries before Maurice Odumbe slid one down the leg. Tariq had moved a foot or so, and did not have to move his gloves an inch; the ball landed in his gloves. Ten overs later West Indies were bowled out for 93. Tariq did not play another ODI.

Tariq played three more recorded matches that year before his career ended.  He scored 46 (for Kenya) and 44 (for Nairobi Provincial Cricket Association XI), both against Netherlands in his last two matches. In the last match he also effected 3 stumpings.

He owns a shop in Nairobi. It was because of his profession that Daily Mirror (Kenya) ran the famous headline LARA IS SHAMED BY A 15-STONE SHOPKEEPER, A DENTIST AND A TENNIS PLAYER, referring to Tariq, Chudasama, and Aasif Karim, in that order. 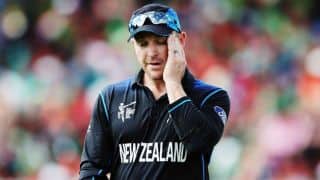 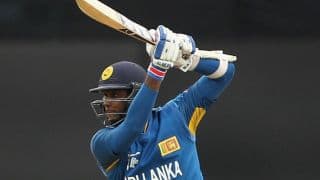