Taylor-made for ‘pre-eminent bracket of world-beaters’

Taylor-made for ‘pre-eminent bracket of world-beaters’

There is a strong buzz going around these days in the circles about the top four young batting sensations in world cricket — Steve Smith, Virat Kohli, Kane Williamson and Joe Root. Most unanimously they are the 'fabulous-four' of international cricket today. But giving them a good run for their money is the latest English sensation James Taylor.

There is a strong buzz going around these days in the circles about the top four young batting sensations in world cricket — Steve Smith, Virat Kohli, Kane Williamson and Joe Root. Most unanimously they are the ‘fabulous-four’ of international cricket today. But giving them a good run for their money is the latest English sensation James Taylor, who Ankit Banerjee reckons has seriously punched above his weight.

Taylor is surely not an unknown entity in the cricketing circles today but three years back his story was an entirely different one. His ability to play at the top level was questioned; critics raised doubts over his place in the England side. He had to face a lot of undue criticism, worse, coming from his own teammate. On one occasion, it was reported that England outcast Kevin Pietersen had twice asked Andy Flower, the-then coach of the English side, to side-line the short and sturdy Englishman. He was dropped after a forgettable debut against South Africa. During his time outside the English team, he averaged a mammoth 73 in 2013 and 88 in 2014 in List-A cricket and forced the selectors to pick him again.

Today, defying all the criticism, he has come a long way. Such has been the graph of his ascendancy that the cricket aspirants look up to this ever-so young 25-year old from Nottingham. Off late, he has hit a purple-patch and life is hunky-dory for him. His recent ton at Old Trafford helped England clinch victory against the arch-rivals Australia. ‘Punching above his weight’, he single-handedly befuddled the current World Champions and ensured his side’s victory. Besides being a good batsman, Taylor is a livewire at covers, saving utility runs which is a bonus in limited-overs cricket.

The road ahead is a tough one for the young lad, as he is being pitted alongside the cream of world cricket. But his stats look impressive; giving ample confidence that there’s no reason why he won’t succeed. Taylor has played 21 One Day Internationals (ODIs), amassed 685 runs at 40.29. In Tests, it is too early to assess but all that can be said is that he has the tenacity and temperament to take his battle a real, long way. In a short span, he has built a reputation of being an impact player, who when clicks, England stand well placed. Against all odds, Taylor was England’s saving face in their World Cup opening game against Australia. If the team management show the same confidence that they showed Root, England might well be a batting force in time to come.

These are still early days, but the signs are good. If he stays in good shape, he can go on to play for England for the next decade and display his unorthodox brand of cricket. MS Dhoni vs Virat Kohli: Who should captain India against South Africa in ODIs? 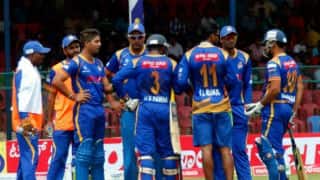