The Fab Four is perhaps the most renowned group of batsmen in Indian or world cricket. And fans do believe that their combined presence increased the strength of the Indian team to a level never seen before or since. Arunabha Sengupta looks at the numbers and demonstrates that as a group of batsmen they were not remotely as successful as assumed. 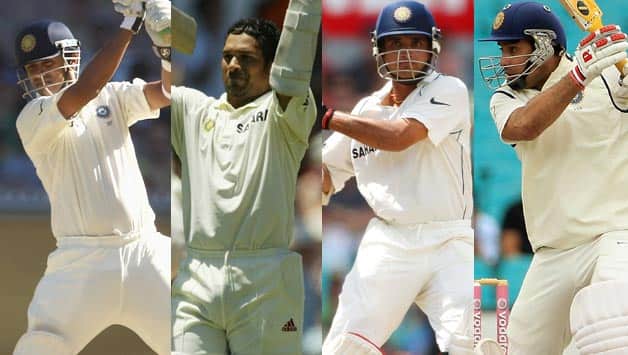 The Fab Four is perhaps the most renowned group of batsmen in Indian or world cricket. And fans do believe that their combined presence increased the strength of the Indian team to a level never seen before or since. Arunabha Sengupta looks at the numbers and demonstrates that as a group of batsmen they were not remotely as successful as assumed.

It is one of the most circulated photographs in Indian cricket. The side profile of the four  famous faces, lined up together, a confluence of resounding names, three of them huge brands, whose careers magically overlapped. Seldom has Indian batting line up been blessed with such a sublime pool of talent.

It was but an inevitable laddering step that created the group name ‘Fab Four’, so enticing in the alliterative allure and promises of greatness. And the label stuck as Sachin Tendulkar, Rahul Dravid, VVS Laxman and Sourav Ganguly served the nation together for 12 years.

And even now, after the ‘Fab Four’ have disbanded for over five years, laments make endless rounds about the good old days. Days when Indian line-up was virtually impregnable with the four ‘great’ names walking out one after the other.

Labels have that characteristic. Often the very name bestows virtual greatness which can be very different from reality.

The moment the tag ‘Fab’ is associated with the names of the four batsmen, one tends to map stories and anecdotes of great feats associated with them. It is a well-known cognitive bias. Other groups of batsmen without such glorifying labels may pile on enormous amounts of runs and take their sides to innumerable wins. But, they will continue to suffer in comparison carried out on the basis of perception. It is because of the power of the collective name and resulting snowball effect of the same in the popular media.

‘Fab Four’ already registers in the mind with absolute weight of excellence — before one looks at the evidence to see whether they were really fabulous as a foursome. One is already convinced that they were the greatest possible combination ever, in India and perhaps the world.

It turns out that the Fab Four played together in 80 Tests. That is a whopping huge number, and in terms of longevity they were indeed fabulous.

However, when we turn to the results India achieved in those Tests, it doesn’t make for very enjoyable reading. India, with the four superstars playing together, won 26 and lost 27 of the Tests, which gives them a win-loss ratio of 0.96. It does not seem to be too flattering for the superb unit we often take them to be.

When we look at the numbers without the minnows, the numbers turn even sadder. When Zimbabwe and Bangladesh are removed from the equation, we find that the Fab Four have appeared together 74 times, and won 21 and lost 26. That gives a very ordinary win-loss record of 0.81.

Now, in the face of the bewailing about the olden days of the Fab Four, let us look at how India has fared since the group was disbanded, after Sourav Ganguly retired in 2008.

It may be concluded, with heavy dollops of desperate rationalisation, that the influence of the great band of cricketers left India a better side. However, the numbers make it slightly difficult to justify all the forlorn retrospection of the days when those four batted together. Certainly the laments about the good old days need to be revisited.

Let us now go down to more granular details and look at how exactly the Fab Four performed during their days.

In the 80 Tests that the Fab Four played together, Tendulkar scored the highest number of runs (6692) while Dravid sported a fractionally better average (53.86).  Laxman also performed creditably with 5253 runs at 46.90.

We can definitely say that Tendulkar and Dravid fully deserved the tag fabulous, while Laxman was very good indeed. However, if we look at Ganguly (4334 runs at 35.52) it is pretty difficult to associate fab with the figures.

Suresh Menon once observed that in order to fit them into the Fab Four, Tendulkar had to be pulled down several notches and Ganguly pushed up. I do agree with the sentiment about Tendulkar if we take his entire career in consideration. Yet, for the Tests the four batsmen played together we may not need to pull Tendulkar considerably down. His figures are comparable to the others, mainly due to the large intersecting period with tennis elbow and other afflictions.

However, the numbers do underline the truth in Menon’s assessment of Ganguly. There is a huge gap in his performance and that of the others. In any case, a top order batsman averaging 35.52 over 80 Tests is a tad difficult to digest.

It is not that Ganguly was pulling his weight with his captaincy — captaining 39 of the 80 Tests. In the light of the performances, the idea of clubbing Ganguly in the group and still calling it Fab Four in the global context is a bit far-fetched.

In the 80 Tests the ‘Fab Four’ played together


The ‘Fab Four’ in comparison with other groups of batsmen

Let us consider the total runs that they got in these matches. Overall they scored at 47.49. Dravid and Tendulkar, with their excellent averages, ensured that the combined average remained fairly high. Yet, if we look at the numbers of other groups of batsmen, we come across plenty of better foursomes.

I am not even trying to stretch across time here.

Even moving back to the eighties to measure alongside batting line-ups like Gordon Greenidge, Desmond Haynes, Viv Richards and Clive Lloyd (39 Tests together averaging 50.35 overall) or Mudassar Nazar, Mohsin Khan , Zaheer  Abbas and Javed Miandad (30 Tests at 53.01 overall) result in nasty jolts.

One need not even consider such supreme foursomes of the hoary past — Peter May, Colin Cowdrey Ken Barrington and Tom Graveney, or Arthur Morris, Lindsay Hassett, Neil Harvey and Keith Miller. The West Indians of the 1960s, the Australians of the Don Bradman era, the English batting sides with Herbert Sutcliffe, Patsy Hendren, Eddie Paynter and Wally Hammond produced numbers that make us wonder how much of the ‘Fab’ is influenced by fabrication.

My argument is that even in their own era, there were plenty of batting sides who performed way better than the vaunted Fab Four, and many of them did not enjoy even a fraction of the hype showered on the Indian Fab Four.

Spatial considerations stops me from listing all the groups of four batsmen who performed better. There are clusters of players of different countries, from whom any four can be gauged to have put on better performances together than the ‘Fab Four’.  Readers familiar with combinatorics will understand why listing all the combinations will produce an endless table. However, here are some illustrative examples from the 1990s and 2000s.


It may be difficult to come to terms with the above table due to the supremacy of the Fab Four which we have tended to assume for long. As we can see, the strong sides of the era — Australia, South Africa, Sri Lanka and England did boast groups of batsmen — sometimes multiple — who performed better than the much strutted Fab Four. Even Pakistan, handicapped by the lack of a fourth batsman alongside Mohammad Yousuf, Younis Khan and Inzamam ul Haq, manage to end up higher by the inclusion of Kamran Akmal. It is mainly Ganguly’s ordinary batting effort that leaves the field open to lower order batsmen like Akmal, Andy Flintoff and Brad Haddin to combine with the top order and form better foursomes.

If we care to analyse, we will find that even in India the Fab Four were not really the best possible combination during their era! Even here, the list is not exhaustive as possible combinations of the names given will produce even more foursomes with better performances.

And if fans of Indian cricket are under the impression that the Fab Four was the first such performing unit in the history of Indian batting, we can do well to look at some figures from the past. Even when the much-maligned Ravi Shastri is included in the list with his ordinary batting talents, we find the past producing better performances.


Cricket is still evolving from the days when past records and statistics had to be dug out of seldom available tomes of Wisden. Hence, tags such as Fab Four still stick to our perceptions creating rosy visions of the cricketers. Even though now figures are abundantly available for all those who are interested to invest some moments of their time, we still struggle to find the facts for ourselves and peel off the layers created by perception, propaganda and branding.

Yes, it does jar with the beliefs we have long held as universal truths. There is of course always the shield of the cliché — “Numbers don’t mean anything”. Yet, actually they do convey a lot if one knows how to look and what to look for. And the figures can go a long way in clearing the misleading perceptions that often clutter our understanding of the cricket world.