After a series-levelling win in the third and final Twenty20 International against Australia at the SCG, India wrapped up their limited-overs chapter this year. Next up, Virat Kohli‘s India will lock horns Australia in four Tests beginning with the first match at Adelaide on December 6.

Australia, as many know, are a weakened side, with two of their most experienced players Steve Smith and David Warner on the last leg of their one-year suspensions. However, former Australia fast bowler Shaun Tait, a strike weapon for captains Ricky Ponting and Michael Clarke, begs to differ.

Tait, an expert for ESPNCricinfo, who called time on his cricket career in May last year, feels the Aussie batting line-up is a little inexperienced, but the hosts, he believes, will be a tough nut to crack in the Tests.

Excerpts from an interview with CricketCountry :

Coming off a loss in the final T20I, how much confidence can Australia derive from that T20I series and what will be key for them going into the Tests?

I am surprised to say because it s probably going to be the performance of the batsmen. The Australian side have got a good bowling attack and we all know that. But, the two best batsmen are on the side lines, so, it s up to the batting team to step up. India have got a great bowling attack and Australia are facing a challenge if their batsmen can stand up and make some runs.

Steve Smith and David Warner Warner, in this regard, have been brought back in the dressing room to probably help the side.

Yeah, they got a bit more time to sit out on the sidelines. It will just be interesting to see the highlights of that. They are the two best batsmen, probably the top five in the world. If you put those two guys back in the dressing room, it s very good, but I suppose that s up to Justin Langer and the support staff if they want to go that way.

Starc, Hazlewood and Cummins have the sting to hurt India s batsmen, but the Indian batsmen are damn good. Virat Kohli hitting some runs in the last Twenty20 game, finding some form, goes well for the Indians. Australia s batting have a big challenge ahead of them, but India will have a bigger one of facing the Australian bowling attack. That s what it s going to be.

Do you think Australia will have a ploy to stop to Virat Kohli?

They will probably stick to what they know and bowl where they need to bowl. I m sure they will have all the video footage and they will try to have a few plans. The best plan for them is to bowl fast and bowl in the right areas. A good ball will get Virat out. It s going to be a great challenge for Kohli as well, to see how he goes against the Australian attack in Australia.

Indian pacers got a fair bit of movement in England, not going to be the case in Australia, with the Adelaide having a flat drop-in pitch.

Indian guys can still swing the ball. Bhuvneshwar and these guys, they ve got great discipline. They bowl a good line and length, and basics of Test cricket, they ve got that under control. You get some flat wickets in Australia, which is good for batting, but these guys have got their work cut out for sure. What s in the Indians bowling favour is Australia have got few guys who are untested in the Test level. Aaron Finch and Harris [Marcus Harris], these guys, they haven t really sealed their spot in the Australian Test team, so the Indian guys will be looking to exploit that.

Do you think then that the left-arm pacer Khaleel Ahmed should have been included in the Tests?

Yeah, he s got plenty of time, and they got that plan of bowling him, now in the T20Is. At the moment, he s doing ok and he s a pretty good prospect. He got to get around in the Twenty20 a little bit. Every bowler gets that and he s only young and is starting out fresh. Who knows? If there are a couple of injuries, he can stand up anyway, but at the moment, India should just work with their frontline experienced fast bowlers.

Yes, India do have a good chance of beating Australia this time, there s no doubt about that. But at the same time, it s very difficult to come here and win. Same in India, even if they got a weak side, it s very difficult to beat India in India. You can never be sure here. The guys are used to their home conditions. I don t think it s going to be a walkover, it should be a close series.

What will be the ultimate Test in the series?

It will be Australia s bowling attacks, which is one of the best in the world, versus India s best batting line ups in the world. That will be the test. Who can come out on top. If the Australian bowlers can knock over the Indian batsmen, then they have a reasonable chance. But, if the Indian batters bat well, then the Australian batting line-up which is a little bit inexperienced, will be tested. If India don t win the series, it will be on the back of their batsmen not making the runs.

Any Indian Premier League commitments along the way?

I m doing some coaching work in a bid to get my levels up. I would love to be a bowling coach of one of the IPL teams. I love being around the IPL. If I can get back there eventually, it will be great. I think I ve got a lot of T20 experience to give them. 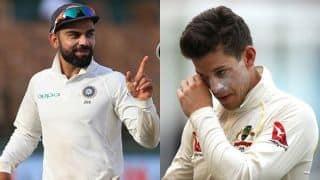