Murali Vijay and Robin Uthappa face important challenges. Vijay is a dasher in T20 cricket and a dependable batsman in Tests. Somehow, he has flattered to deceive in One-Day Internationals (ODIs).

The last time India toured Zimbabwe, they took a reasonably-strong side under Virat Kohli. Most of the players from the ICC Champions Trophy 2013 victory made the trip and sealed a 5-0 triumph. Memories of the previous visit were fresh perhaps. A second-string side under Suresh Raina’s leadership failed in the tri-series in 2010, losing both matches to Zimbabwe. The Elton Chigumbura-led side are a fighting unit and can produce good performances on their day.

India’s long season prevented them from sending a full-strength unit to Zimbabwe. With a lot of cricket being played in recent times, most of the front line players deserved a break. Bangladesh’s growth as a side warranted a strong Indian unit. Zimbabwe too may have been given a little similar respect had there not been such a long season. Nevertheless, it is an opportunity for the fringe players to make a mark.

Ajinkya Rahane comes in as skipper. A very quiet individual, it would be interesting to see how he leads the side. Unlike Kohli, he isn’t someone who exudes aggression with his body language. He is understated and calm. Rahane the batsman also has a task at hand considering the fact that he was left out in Bangladesh for a couple of games. His one-day record is no reflection of his ability and it is time he brings consistency to the table.

Also, Murali Vijay and Robin Uthappa face important challenges. Vijay is a dasher in T20 cricket and a dependable batsman in Tests. Somehow, he has flattered to deceive in One-Day Internationals (ODIs). Uthappa has had big runs in domestic cricket and can use it to keep himself in the scheme of things. He also faces competition from Wriddhiman Saha for the wicketkeeper’s role. Then there is Manish Pandey, who has finally been awarded a call-up after years of consistency in domestic cricket. He was unfortunate when the West Indies series got shortened last year. Now, here is his opportunity.

Through that, Zimbabwe would feel quietly confident of winning the series. They have been very competitive against the big sides and an understrength India is their best chance at a series win. When compared to 2013, they have a much better chance this time around.

Sourav Ganguly: 12 controversies involving the man who changed the face of Indian cricket 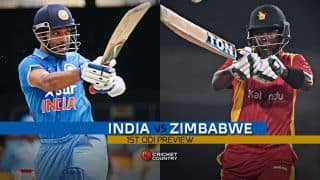 Venkatapathy Raju: 12 facts about the pencil-thin spinner who was mockingly nicknamed ‘Muscles’